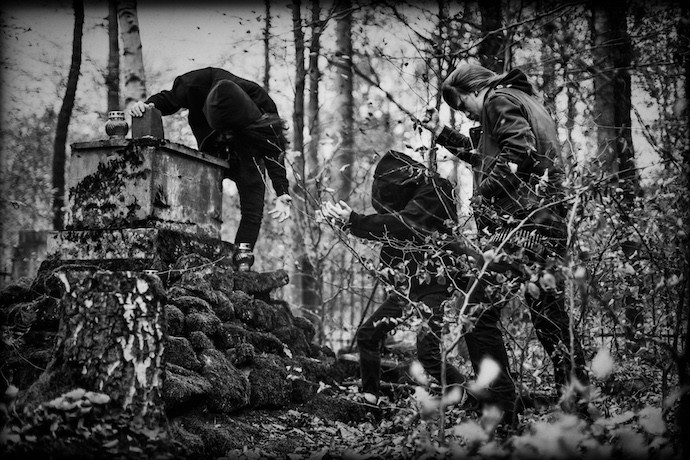 (Comrade Aleks brings us another interesting and informative interview, this time with the German band Into Coffin, whose new EP will be released by Terror From Hell digitally and on CD upon the 4th of December.)

For timeless aeons human stared into the night skies and wondered if there were gods or demons living in the eternal depths of the shimmering void. And though humanity reached space – even with just one arm – we’re far from discovering all its secrets.

The German trio Into Coffin proclaimed with their full-length Into A Pyramid Of Doom: only extraterrestrial horror awaits amongst the stars. Their cruel and blackened death doom metal compositions were constructed under the influence of H.P. Lovecraft’s mythology and their own imaginations. The album was released just one year ago (and is on tape from Caligari Records), but Terror From Hell Records are already welcoming you to embrace The Majestic Supremacy Of Chosmic Chaos, the band’s thirty-minute-long EP.

As the label promises, this record “contains slow, heavy bulldozing riffs pairing with the pummelling drumming that create an uncomfortable tension right before the whole thing ruthlessly fall in an abominable ride into the somber blackness”. I’ve tried to puzzled it out with Into Coffin’s collective mind. END_OF_DOCUMENT_TOKEN_TO_BE_REPLACED