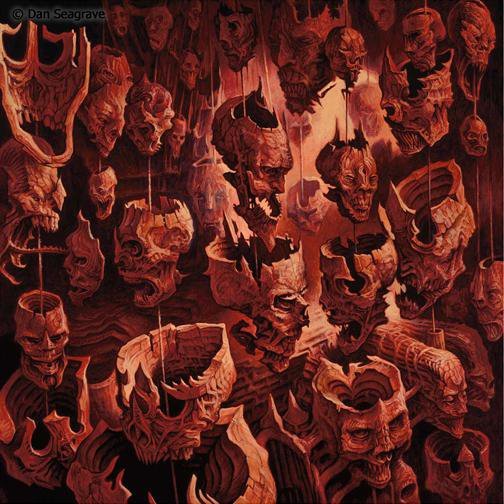 Dan Seagrave is a god among men, at least when it comes to pens, pencils, and paint. I’ve slobbered over his artwork before — for example, in this review of Wretched’s Beyond the Gate in 2010, which included many examples of his album art at the end. But I got a fresh reminder this morning when Rev. Will sent me a link to that stunner up above.

I had to do some net sleuthing to find out what it was. Turns out it’s the cover art to a 2011 album called Facet of Aberration by a thrash band from the Bay Area called Invection. I hadn’t heard of them before, but I’m throwing in some of their music after the jump.

As for Mr. Seagrave’s artwork, there’s a fan-sponsored page on Facebook, the creator of which has been adding album art — without any band logos or album titles to obscure the sheer brutal goodness of the artwork. As of a few minutes ago, that page included 65 pieces of album art. You can gaze upon all of that via this link. And after the jump, you can see a few more examples I haven’t previously posted at NCS.