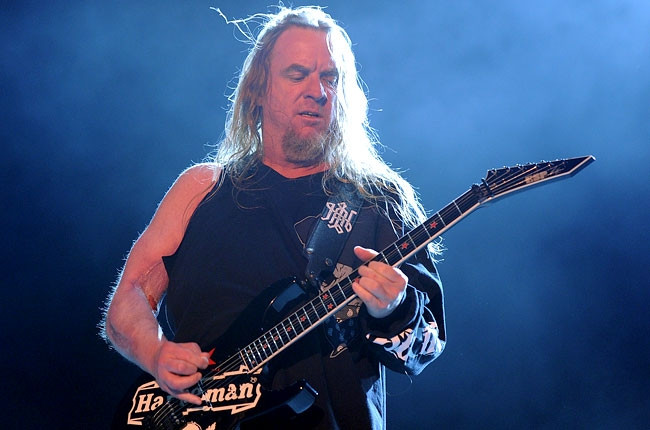 Slayer guitarist and founding member Jeff Hanneman died earlier today near his Southern California home. He had been forced to pull out of live performances after contracting necrotizing fasciitis, most likely from a spider bite. But the cause of death has been identified as liver failure.  From a press report:

“Slayer is devastated to inform that their bandmate and brother, Jeff Hanneman, passed away at about 11AM this morning near his Southern California home,” the band’s longtime publicist said in a statement. “Hanneman was in an area hospital when he suffered liver failure.”

Hanneman co-founded the thrash metal greats with Kerry King in 1981; their breakthrough came in 1986 with the brutalist album “Reign in Blood.” Hanneman wrote or co-wrote the set’s standout tracks, “Angel of Death” and “Raining Blood.”

Hanneman is survived by his wife Kathy, his sister Kathy and his brothers Michael and Larry.

This is sad news. Jeff Hanneman is gone but his name will be remembered in the community of metal for a very long time.