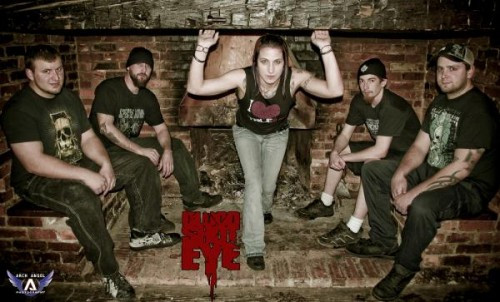 As I enjoyed Steff Metal‘s guest post from a few days ago and her unusual collection of female black metal and death metal vocalists who can growl and howl with the best of the dudes, something nagged at the back of my mind. Something I’d forgotten. Something about a killer female vocalist whose killer band had a new album coming out.

My mind is like a steel trap (rusted shut), and I knew it would come to me (probably as the answer to some completely different question). And then it hit me (like the car that knocked me out of a crosswalk last year): Bloodshoteye!

We wrote about this band (here) on the day after Christmas when we stumbled across a report that they had signed with Canadian-based label CDN Records for the release of their third album, Expect the Unexpected. We listened to some songs streaming on the band’s MySpace page, we watched some performance videos, and we were duly impressed. And not just because their vocalist, Jessica Desjardins, was an attractive woman who could belt out those broken-glass-gargling vocals we all know and love so well here at NCS.

In that previous post, we noted that the new album was due for a February release and that we would be watching for it. And sure enough the album dropped on February 12. And sure enough, we missed it (“mind like a steel trap,” my ass!). Until it came back to us as a result of Steff Metal’s guest post. So we got the new album, we listened to it, and man is it good! (read on after the jump, and listen to a sample track . . .) END_OF_DOCUMENT_TOKEN_TO_BE_REPLACED

As of this morning I need to add a seventh name: Jessica Desjardins of Canadian deathcore band Bloodshoteye.   (More after the jump, including some video) END_OF_DOCUMENT_TOKEN_TO_BE_REPLACED