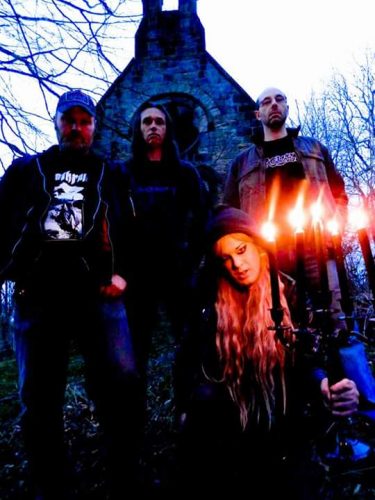 (In this new interview Comrade Aleks brings us an extensive discussion with Kat Shevil (ex-Blessed Realm), the vocalist/drummer of the British death-doom band Uncoffined.)

Uncoffined was raised on the ruins of the traditional doom metal outfit Blessed Realm in 2011. Blessed Realm existed as Tears from 1993 ’til 1994 and then the band acted under its blessed name ’til 2002. It was split without even a full-length album in its discography, but in July 2017 At War With False Noise released Doomography 1993-2002, a collection of demos and unreleased tracks.

Besides that, three ex-Blessed Realm members — Kat Shevil (drums, vocals), Gory Sugden (bass), and Jonny Rot (guitars) created the horror-movie-influenced satanic death-doom metal outfit Uncoffined together with guitarist G.Hall. Well, how much of death is in their doom? Do they still hold on to the traditions? Kat knows better, let’s give her the floor. END_OF_DOCUMENT_TOKEN_TO_BE_REPLACED