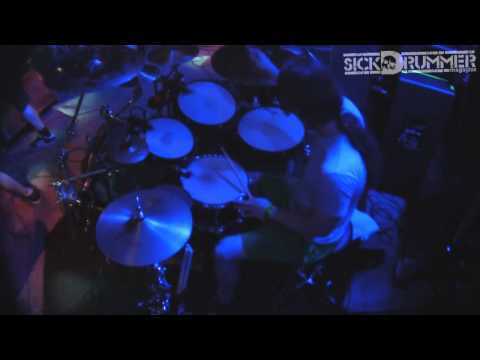 Last night I didn’t quite finish the review with which I had planned to start our posting day at NCS before running out of gas. The fact that I spent most of the night drowning my sorrows in whiskey with some friends may have had something to do with that. So, I need a little time to (a) pound coffee, (b) continue writing my review, (c) pound coffee, and (d) pound more coffee.

In the meantime, please amuse yourselves by watching Ken Bedene. He used to be the drummer for Abigail Williams and is now the drummer for Belgium’s Aborted. The two videos after the jump were originally posted by Sick Drummer magazine. They were filmed during Aborted’s performance at the DNA Lounge in San Francisco on May 8. The two songs are “Источник Болезни (The Origin Of Disease)” from Aborted’s 2012 album, Global Flatline, and “The Holocaust Incarnate” from Engineering the Dead (2001).

Ken Bedene is amazing. He appears to be part cybernetic metronome, part wolverine in full attack mode, and part Zen monk. Watching these videos means I need less coffee to wake up, which means less time peeing, which means more time pounding the keyboard, which means I should be back soon with that review. Enjoy Ken Bedene and Aborted.
END_OF_DOCUMENT_TOKEN_TO_BE_REPLACED