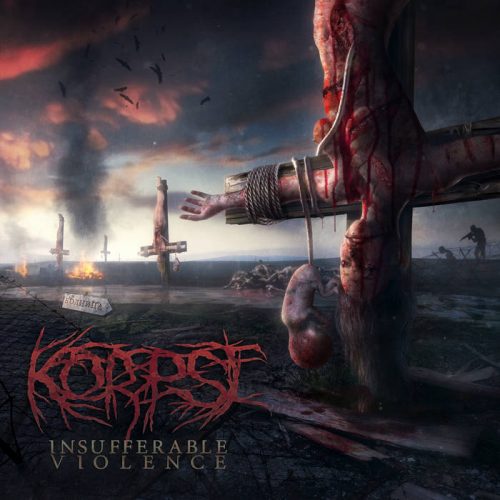 (We present Aleksha McLoughlin‘s review of the third album from slam-tastic Dutch death-dealers Korpse, which came out recently on Unique Leader Records.)

2021 is already shaping up to be a better year than the 365-day horror story that was 2020, as we’ve already been graced with some truly excellent Death Metal releases, including Korpse’s third studio album, which is one of the best Slam records of the past five years.

And although it’s been a long time since the band released Unethical, all the way back in 2016, they’re as unflinchingly savage as they have always been.

This time around, however, in a similar vein to Vulvodynia’s 2019 record Mob Justice, Korpse have switched gears lyrically to address the horrors of the world, as opposed to gratuitous gore for gore’s sake, and it works well, as while Unethical only occasionally touched upon these lyrical beats, Insufferable Violence goes all in.