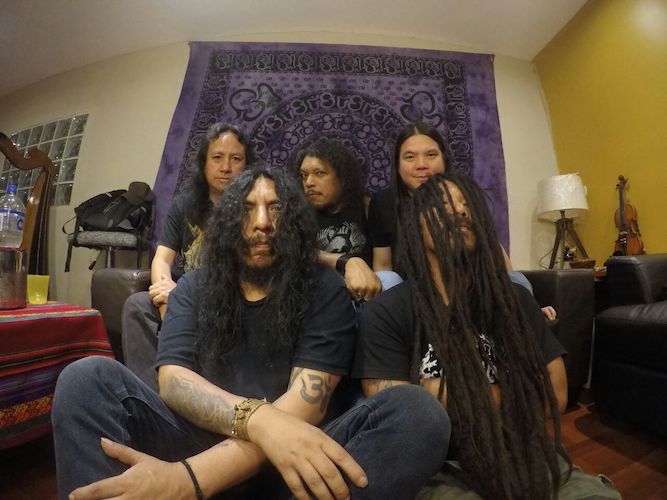 (This time Comrade Aleks interviews one of the members of the unorthodox Peruvian metal band Kranium, whose roots go back to the early ’90s and whose new album Uma Tullu (which you can stream below) was released on December 1st, 2020.)

Kranium is a legend of the Peruvian underground. The band was formed in 1985 as Murder but since 1986 it’s been known as Kranium. Their early material tended towards savage a thrash/death meta, but years passed, some members left and others joined the band, and their first full-length Testimonios finally was released in 1999. The story behind its making is long and far from easy, as Kranium drew the attention of the Swedish label Plasmatica Records  who promised to fund their recording sessions but had a hard time, and lack of money prolonged recordings for almost three years.

This material appears to be a mix between traditional doom metal with a bit of a raw edge, lyrics in Spanish, and arrangements of traditional Peruvian instruments. I’m surprised that this album is a kind of “lost gem”, forgive me this cliché, and I hope Kranium’s new and authentic-as-always album Uma Tullu (released in December 2020) will reach more listeners all over the world.

The band’s lineup has changed, yet its core remains the same: Eloy Arturo (guitars, songwriting) is one of the founding members, and Mito Espíritu (guitars, wind instruments, charango) has been in the band since 1991 (there was a break for a few years, but it doesn’t make a difference). Dennis Yamazato (drums) has played in Kranium since 2005, and Ian Chang (bass) since 2010. Our current guest Christian Meléndez (vocals, keyboards) is a relatively new member — his experience in Kranium is “just” ten years. But he’s quiet a talkative collocutor, and I’m glad we had this interview. END_OF_DOCUMENT_TOKEN_TO_BE_REPLACED