(We welcome new NCS contributor Lewis Edwards, who wrote this review of the new album by the Finnish band Krypts, which is being released today by Dark Descent Records.)

Any death metal fan worth his salt needs no introduction to Krypts or why Remnants of Expansion has been one of the most anticipated death metal albums of the year, but for those of you less enlightened, Krypts are a four-piece old school death metal revivalist band, of sorts. Their 2013 debut full-length Unending Degradation saw a preference for slow/mid-tempo dirges in the vein of Rippikoulu, accompanied by the off-kilter riffing styles of Demilich and Adramelech, and it cemented Krypts’ place as one of the most exciting bands in modern death metal.

Remnants of Expansion pulls no punches from the very start; the reverb-laden sustained notes at the beginning of album opener “Arrow of Entropy” really set the tone for the rest of the record, and the sense of atmosphere is clearly felt as the song progresses from one sprawling doom-influenced riff to the next over the course of ten minutes. Simply put, it’s an absolutely monstrous way to open the album, and one which perhaps sees Krypts making a signal of intent. END_OF_DOCUMENT_TOKEN_TO_BE_REPLACED 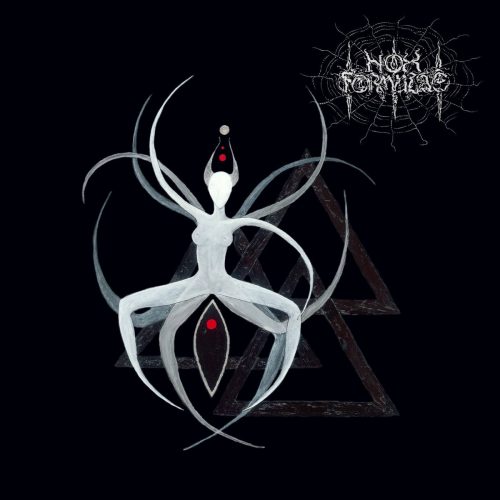 (We welcome guest contributor Lewis Edwards, who wrote the following review of the new album by the Greek band Nox Formulae.)

Few bands in black metal manage to strike the balance between originality and familiarity, and those that do usually tend to go through the “trial-and-error” process before crafting that perfect sound. This couldn’t be any further from the truth for Greek legion Nox Formulae, however, whose debut album The Hidden Paths To Black Ecstasy is an unforgiving lesson in how to take influence from your contemporaries while simultaneously creating something genuine and distinguished.

Intro “NOXON” sets the tone for the rest of the record, with its steady, ritualistic percussion creating a sense of unease from the very start. This unease turns out to be well-founded, as “The Shadow Smoke” then rips through the air with its brittle, trebly guitars and reverberated background notes. It’s a truly memorable way to open up an album, reminiscent of the way in which Darkthrone pummel the listener after a foreboding intro in their quintessential album, A Blaze in the Northern Sky. END_OF_DOCUMENT_TOKEN_TO_BE_REPLACED