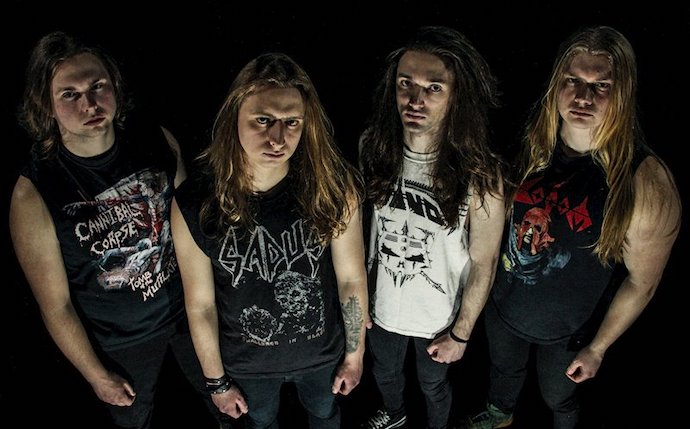 If you do a little poking around in the landfill of the internet you can find videos of legends before they were legends, such things as a 1989 rehearsal by Sepultura (here), a bootleg video of Carcass performing in that same year (here), and a Sodom concert from 1988 (here). One thing that jumps out, besides the energy of the music, is just how fucking young they all looked.

The Ukrainian thrash metal band Mortal Vision look damned young too — because they are damned young, in their early-to-mid 20s. But they’ve got that same kind of lightning-in-a-bottle energy you see in early performances by the legends, and a precocious talent for cooking up hell-raising, neck-wrecking music that’s highly contagious. Their label Redefining Darkness Records pitches them as “Schizophrenia-era Sepultura meets Persecution Mania-era Sodom at its finest”, and they are indeed a new force to be reckoned with.

As vivid proof of that, today we’ve got the premiere of an explosive video for “Devastated Existence“, which is a new single off Mortal Vision‘s forthcoming debut album, Mind Manipulation. END_OF_DOCUMENT_TOKEN_TO_BE_REPLACED