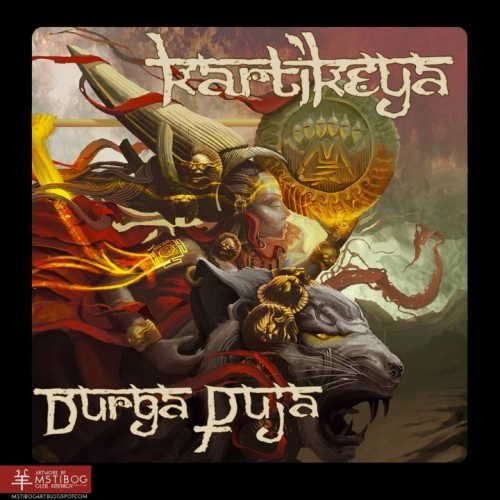 In May of this year, NCS writer TheMadIsraeli introduced us to a Moscow band called Kartikeya, and included links for downloads (here). Apart from the stunningly good (and quite different) death metal to be found on the band’s latest album, Mahayuga, that album also featured remarkable artwork by a Russian artist, “Mstibog” Kirenkov. We included a lot of his album art with TheMadIsraeli’s review.

Yesterday I found out that on October 1, a label called Grailight Productions will be releasing a new limited edition Kartikeya “single” titled Durga Puja, and it will include the amazing artwork of Mstibog once again. Up above is the cover, depicting the ten-handed war goddess Durga.

The new single will include covers of songs by Sepultura and Melechesh, re-recorded and re-arranged versions of songs from Kartikeya’s first album The Battle Begins, a live version of a song called “The Path”, and a brand new song, “Durga Puja”, which was mixed/mastered by the producer Logan Mader (Soulfly, Gojira, Divine Heresy, W.A.S.P., DevilDriver, etc.). After the jump, you can see the track list.

Also after the jump you can hear Kartikeya’s cover of “Triangular Tattvic Fire” by Melechesh. It’s a blowtorch blast of wonderfully vicious, hard-charging, eastern-tinged, blackened death metal and it sounds fantastic.  I’m really looking forward to this single. END_OF_DOCUMENT_TOKEN_TO_BE_REPLACED