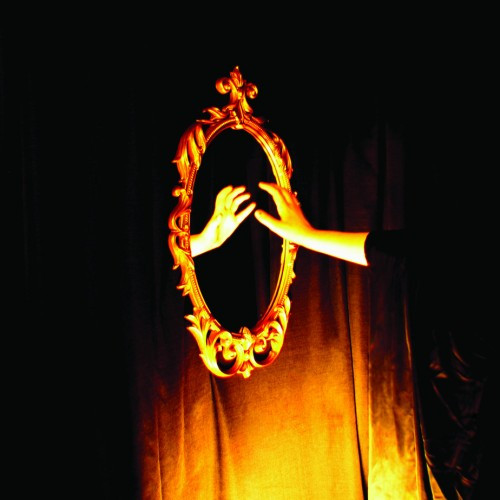 I’ve been meaning to write about this EP by Seattle’s Ocelot Omelet for months, and finally kicked myself in the ass hard enough to get it done (I blame my delay on fear of suffering a hamstring injury). It’s different in some ways from most of the music we cover at NCS, but despite my tunnel-visioned, metal-only approach to what I usually consume, I’ve enjoyed it so much that not writing about it would be… immoral.

The EP is entitled Present In the Dark and it consists of three songs, one of which simply has a question mark for its title. I know some people find genre labels useful, but when I try to think of them in this case, a question mark is what comes to mind first, because trying to affix labels to this music isn’t easy. But to make a stab at it, I’d say it’s like a mash-up (and a seamless one) of throwback psychedelia, sludgy stoner doom, and progressive rock, swimming in a dark narcotic haze.

“Out of the Frying Pan and Into Another Frying Pan” is the catchiest and most “accessible” of the three songs — at least after the squeal and drone of feedback and the squalling, shrieking sounds of the guitar in the song’s intro. After that, the music really starts to roll, with fat sludgy riffs and drum and bass lines that you can feel in your spine. END_OF_DOCUMENT_TOKEN_TO_BE_REPLACED

You really can’t accuse this site of being too narrow-minded, despite that thing about no clean singing, which we obviously don’t mean literally these days. We cast a wide net for our metal, catching all manner of shiny fish from a multitude of genres. But today I thought I’d feature new songs and videos I’ve come across in recent days that are outside even our expansive boundaries, or at least on the fringes. Before I mix my metaphors any further, let’s get to it:

Ocelot Omelet are a Seattle band whose music is difficult to describe. At one point they termed their sound “pseudo-retro tele-gothic psycho-hippie filth-punk”. Based on their first album, 2011’s Elliptical Optusion, that’s really not a bad description, as difficult as it may be to grapple with as an abstract concept. But based on their most recent recording, I think they’ll have to work the word “metal” into it some way.

Earlier this year, Ocelot Omelet recorded a new three-song EP by the name of Present In the Dark, with the legendary Jack Endino handling the engineering work. Two versions were mastered, one for vinyl and one for digital, and the band have now successfully completed a kickstarter campaign to finance pressing of the EP on 180 gram vinyl. I heard some of this new material performed live last summer, and I left with a severe case of headbanger’s neck. END_OF_DOCUMENT_TOKEN_TO_BE_REPLACED