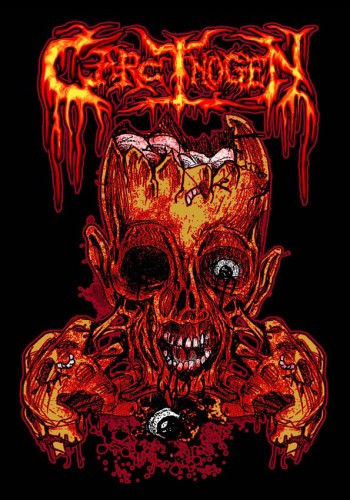 When last we checked in with New York-based Carcinogen, they were building up to the release of their debut EP, Unholy Aggression. That was last October, and now they’ve released a follow-up EP with four new songs called Human Atrophy. For the cover art, they’ve turned once again to that Indonesian underground artist who calls herself Oikwasfuk (of Nothing Sacred Artwerks). Nice to see that she hasn’t toned down the grisliness.

Carcinogen haven’t toned anything down either (thank goodness). When we wrote about the band in October (here), we praised their “stripped-down, fuzzed-out, palm-muted, drop-tuned, guttural-voiced, percussive approach” to old-school, thrash-paced death metal. On the new EP, Carcinogen continue to perfect their daunting assault on the senses, enhancing the technicality of their playing and jazzing up the pyrotechnics with even more pronounced tempo dynamics.

What Carcinogen haven’t done is turn down the temperature in their blast furnace. Pressing play on this EP is like sticking your unprotected head into that furnace. You’ll come out at the end with all your hair burned off and your face converted into a charred ruin — but your crispy, senseless head will still be bangin’. (more after the jump, including a stream of the whole EP . . .) END_OF_DOCUMENT_TOKEN_TO_BE_REPLACED