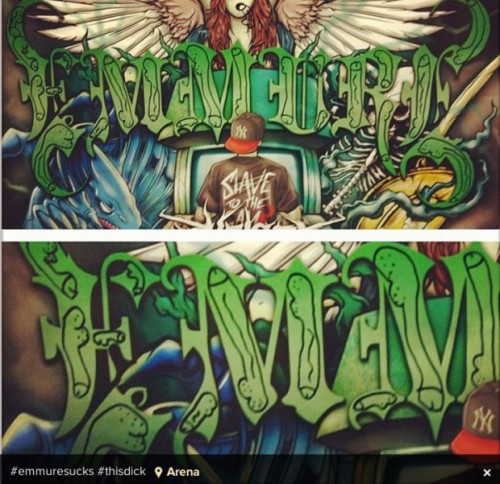 Before diving into the subject of this post, let me make one thing clear:  I do not understand why metal blogs spend print on Emmure’s Frankie Palmieri. The writers I have in mind do not listen to Emmure. Most of their readers do not listen to Emmure. Frankie Palmeri is not an interesting person. Therefore, why write about him? The only answer I can think of is that he’s easy to make fun of, because he says ridiculous things. Seems like a waste of space to me. Now, having gotten that off my chest, I’ll move on and write about Frankie Palmeri.

By way of background, Emmure are touring Europe at the moment. So are The Atlas Moth — a band whose music I like a lot. The Atlas Moth have been stopping at venues where Emmure have previously stopped. Upon finding Emmure stickers and assorted tags at these venues, The Atlas Moth have been defacing them with drawings of dicks, because, well, The Atlas Moth think Emmure sucks. This has led to a war of words with Frank Palmeri, which is sort of like going to war with a cockatoo. Things that sound like words come out, but they don’t make much sense.

Yesterday (May 7), while performing in Moscow, Franki Palmeri received an electric shock while in the middle of a song, a shock that was powerful enough to knock him straight down and out cold. Obviously, a dangerous situation that could have been worse, though Palmeri has recovered and is already making PR hay out of the incident.

And finally I come to the subject of this post. In a display of creative genius, Cris Bissell, the drummer for a Wisconsin band named Orwell, created a music video, pairing up a continuous loop of film showing Palmeri getting zapped to The Atlas Moth song “Holes in the Desert” (which is a killer song). I found this to be funny as shit. Why?  END_OF_DOCUMENT_TOKEN_TO_BE_REPLACED