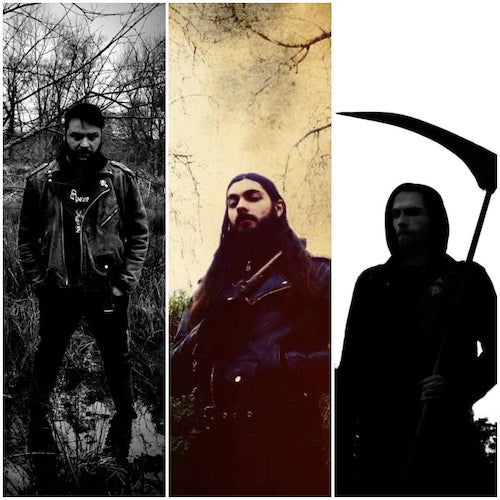 I hope our constant readers are used to long interviews because for our luck there are a lot of both new and old bands who have something to tell and to open our eyes on the things previously unseen.

When I received a new promo pack from Antiq Records there was a new name on it – Paydretz — and again the cover art did its work, making me play their debut album Chroniques de l’Insurrection and try to search for the story behind it.

This French trio consists of Sven Avel Viz (guitars, bass, drums), Michel de Malvoisin (guitars, backing vocals), and Geoffroy “le Veuzou” (vocals, bagpipes, whistles and keyboards). Geoffroy explains the name of the band: “Paydretz” was the nickname given to the fighters of the Vendean general Charette, who came from the region of Retz, in French “Pays de Retz” which gives us “Paydretz”.

“Vendean” what? – you wonder as I did. Yes, this black / folk masterpiece tells the story of the Great Vendean Insurrection (1793-1796) from the point of view of the Vendean insurgents… And yes – this interview will reveal more about it, so lads and lasses take your copybooks and pencils and be ready. END_OF_DOCUMENT_TOKEN_TO_BE_REPLACED

Those of you who are already familiar with the releases of the distinctive French label Antiq Records know that the bands who gather beneath its banner have an affinity for tales and tunes of bygone ages and old instruments, often melded together with the ravaging power and intensity of metal. And to that congregation of talents Antiq has added Paydretz, a French black/folk metal project featuring members of Véhémence, Himinbjorg, Hanternoz, Grylle, Belenos, and Wÿntër Ärvn.

Paydretz’s striking debut album is entitled Chroniques de l’Insurrection, set for release on October 8th. It’s a 14-track musical narrative of “the War in the Vendée” that took place in France between 1793 and 1796. This was a counter-revolution, an uprising among the French peasantry and a few royalist noblemen in the Vendée region during the Revolution’s reign of terror in Paris. It achieved a series of military victories before the counter-revolution was finally (and brutally) suppressed.

The song we’re presenting today, “Sous le Bannière Blanche“, is the sixth track in this opus. Its title refers to the white royal flag, as opposed to the Revolution’s tri-color flags of blue, white, and red. Later on in history and on the album (to borrow Antiq’s words), “defeats and fatigue of the wartime made the peasants weary of the situation and they abandoned the uprising (around 1800 and the arrival of Napoléon), so this is quite the rising of power of the album, and afterwards it declines to more bitter rage and discouraged feelings”. END_OF_DOCUMENT_TOKEN_TO_BE_REPLACED

I didn’t try to make this usual Sunday column last Sunday. Just too weary and too hungover, which I did predict on Saturday. By waiting, I came across things that I wouldn’t have written about then, because I didn’t know about them then.

The music in this blackened roundup reinforces my belief (which is reinforced every day) that I will never become bored with extreme music. It continues to evolve, and to be filled with tremendous spirit and inventiveness.

Yeah sure, there’s a lot of boring music being made by metal bands. I encounter plenty of that. You do too. But in general, barring the lightning strike, there’s nothing good in any aspect of our lives that doesn’t require sitting in the stream with the pan in your hand, sifting for the gold until your ass is drenched and your fingers are numb. Here are some nuggets, even if they might slice your fingers and draw blood when you try to grasp them. END_OF_DOCUMENT_TOKEN_TO_BE_REPLACED