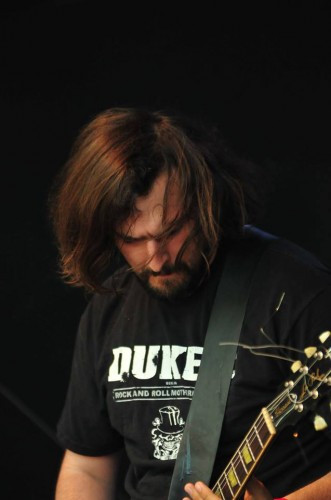 (Comrade Aleks interviews Behrang Alavi, the Iranian-born vocalist/guitarist for Germany’s Samavayo — and of course we have music for you to hear as well.)

Samavayo is the band for those who like stoner music and don’t fear experiments. If you want to know how stoner sounds with progressive, alternative, and Middle Eastern roots, then this band is for you.

Samavayo was born in Berlin somewhere around 2000, and different elements have prevailed in their music in different periods and on different records, but after all of that, the band have found their golden mean. I do think that their last work stands a bit apart from other albums – it’s a vinyl split release by Samavayo and the Russian band The Grand Astoria. We had a talk with Behrang Alavi (vocals, guitars) about this record and some other things. END_OF_DOCUMENT_TOKEN_TO_BE_REPLACED