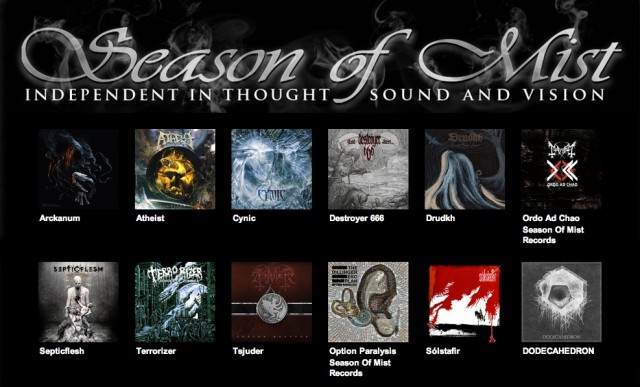 Thanks to MaxR of Metal Bandcamp, I just discovered that the wonderful Season of Mist label has recently set up camp on Bandcamp. As Max reports, “The bands have individual pages, each featuring their Season of Mist discography. Among the 44 bands available now, we find symphonic death metal giants Septicflesh from Greece, and their three albums from the Season of Mist catalog: Sumerian Daemons, Communion, and The Great Mass from 2011.”

In addition to Septic Flesh, you will find pages for the most recent releases by such NCS favorites as Solstafir, Thy Catafalque, Drudkh, Rotting Christ, Ghost Brigade, Nader Sadek, Benighted, Elitist, Esoteric, Minushuman, Nothnegal, The Dillinger Escape Plan, Terrorizer, and a whole lot more.

As those who are familiar with Bandcamp will immediately realize, this means not only that the albums can be digitally downloaded, but also that they can be streamed in their entirety. It also means that bloggers like me can embed full-album streams in our posts, which is what I’m about to do.

For the hell of it, I’m going to include an album stream after the post for a record called Legion Helvete by the Norwegian band Tsjuder, who trace their roots back to 1993.  Legion Helvete was released in October 2011. I meant to listen to it then, but failed. I’ve been listening to it this morning, and the music is absolutely killer. END_OF_DOCUMENT_TOKEN_TO_BE_REPLACED