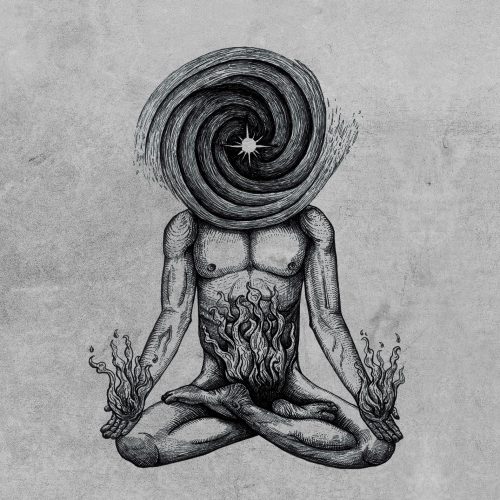 In the most rudimentary sense, split releases provide a vehicle for the participating bands to each release new songs in between more extensive releases of their own music, while allowing listeners the chance to sample the works of more than one band at a time. But of course there’s no assurance that the combination of songs from different projects in a single release will do any more than that. Whether the songs actually complement each other, and combine in a way that creates a holistic listening experience that’s greater than the sum of its parts, is a very different issue.

The split release we’re premiering today, entitled Vortex, is one that does go beyond a mere bolting together of singles from more than one group. The two up-and-coming black metal bands who are involved — Ophidian Coil from Serbia and Septuagint from Greece — do not follow identical paths in the music you’ll find here, but there is a “chemistry” between them. The songs of each band, though different in their strategies, exhibit a kind of “spiritual” union in which the different dimensions of Luciferian sound combine in a way that creates a near-30-minute experience that’s immersive — and chilling.

We invite you to listen to these four songs below, an opportunity that coincides with the release of Vortex by Deathhammer Records. And of course we have some thoughts about the music to share as well. END_OF_DOCUMENT_TOKEN_TO_BE_REPLACED

(We welcome back Norwegian guest contributor Gorger, who has provided us with a review of a new album by Crom Dubh that originally appeared in his native tongue on Gorger’s Metal, as well his review of a new split by the Greek bands Akrotheism and Septuagint.)

I tipped Islander off to a track by London-based Crom Dubh not long ago, but he’s a busy bee, and I think these guys deserve some attention, so I asked if he wanted me to present a few words on their first album. Today I discovered yet more delightful metal, this time from two Greek bands. What has crawled into the drinking waters of Greece and infected the metal community of the nation lately? I’m adding them as a bonus.

When the British quartet Crom Dubh released their debut after more than ten years of existence, that is something we could take delight in, for these lads deliver rapturous grimness and a poignant fresh take on “melodic” extremity. END_OF_DOCUMENT_TOKEN_TO_BE_REPLACED