(We welcome back Norwegian guest contributor Gorger, who has provided us with a review of a new album by Crom Dubh that originally appeared in his native tongue on Gorger’s Metal, as well his review of a new split by the Greek bands Akrotheism and Septuagint.)

I tipped Islander off to a track by London-based Crom Dubh not long ago, but he’s a busy bee, and I think these guys deserve some attention, so I asked if he wanted me to present a few words on their first album. Today I discovered yet more delightful metal, this time from two Greek bands. What has crawled into the drinking waters of Greece and infected the metal community of the nation lately? I’m adding them as a bonus.

When the British quartet Crom Dubh released their debut after more than ten years of existence, that is something we could take delight in, for these lads deliver rapturous grimness and a poignant fresh take on “melodic” extremity.

Someone put the band in the black cubicle on Encyclopaedia Metallum. I can only acknowledge this as long as we add that the band has torn down the decayed walls to some adjoining cubicles. Crom Dubh is a band that must be heard. The music the band plays is founded in black metal, but with so much more to offer. The sound has a dirty dissonant touch, and a certain timbre that is unique in itself. The band mixes atmospheric, melodic, and folk-metallic elements, but with a complete lack of respect for genre conventions.

Take “Sedition” as an example. Here, Scottish notes are being served as if they’ve been swiped from the closest bagpipe-festival, but without the typical clear and clean sound you would come to expect. Crisp, distorted tones dominate the soundscape. It’s not taken to the “extremes”, such as on Nocte Obducta’s Schwarzmetall or Vanhelga‘s work of anguish, though. Like a raw, rough, gruff, and harsh thug!

The mix of elements from different styles is run cynically and tactlessly through the same rusty grinder, and comes out the other side as a mutual, rancid unit, where big contrasts are not the goal but rather a consistent product that tastes metallic on the tongue. I am mighty impressed by Crom Dubh’s debut Heimweh! A cool debut that could melt steel hearts like a blowtorch.

Heimweh was released by V·n Records on March 13th. The band’s earlier material doesn’t sound too bad either, but it’s not really representable for their new direction. If you are like me, than you have already scrolled down and pressed play before reading past the headline. This stream was relatively delayed, but to my pleasure, and hopefully yours, it was published four days ago. 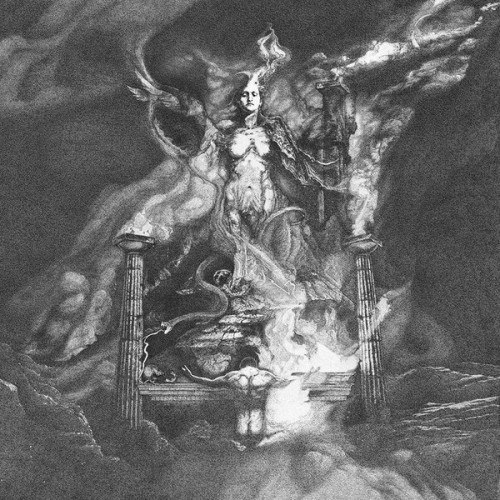 These days anything that can crawl amongst the ranks of Greek black metal bands seems to strike while the iron is hot, and the quality is generally at a high level on one or more levels. Some have originality (at least as much as one can expect), some are highly professional, and still others construct moods that penetrate the psyche as malicious parasites. Greet and meet Akrotheism and Septuagint, two parasites that cause discomfort and nightmare delusions.

We start off with a quick presentation: Akrotheism commenced their journey in 2012 and participated on a split that year. The quintet released the album Behold the Son of Plagues not much more than a year ago. They’ve altered a bit on their expression since then. Septuagint is new to me. The duo went by the name Declaration:Holocaust from 2006 ’til 2011, without more than a demo being released. After appearing under a new moniker it took yet another few years before they released the EP Negative Void Trinity about a year ago.

Akrotheism has become much creepier and crawlier in a more sluggish pace, as well as more ceremonial than on said album. I noticed some similarities with Triptykon last year, and they’ve taken a step closer toward that style this time around. It is generally slow, heavy, and occult. This is music that conjures up thoughts of anonymous cult-clad servants of his master’s will, coming to capture their victim on his behalf by force. The band present two songs of eight minutes and barely fourteen respectively. The variety is good, as different pacing and shades of brutality slide seamlessly while simultaneously coiling and wiggling like a serpent.

I might add that Encyclopaedia Metallum has Aosoth, Funeral Mist, and Thy Flesh appointed as similar bands. There are common elements within the music, but overall the similarity is not remarkable. Some resemblance can be found with the likes of The Ruins of Beverast, but the expression reminds more of Bölzer.

Septuagint‘s contribution is a song clocking in at over 14 minutes. It fits so nicely into this dystopic ritual that I don’t have much more to add. Sphinx: The Great Enigma Of Times consists of 37 hypnotic minutes that shall be allowed to invade, occupy, and enthrall my senses on several occasions to come. The press release (for once) hit the nail on the head with the statement, “…take sepulchral black metal even deeper into the tombs”.

Sphinx: The Great Enigma Of Times was released by Forever Plagued Records on March 30th.

2 Responses to “A PAIR OF REVIEWS: CROM DUBH (“HEIMWEH”) AND A SPLIT BY AKROTHEISM AND SEPTUAGINT (“SPHINX: THE GREAT ENIGMA OF TIMES”)”