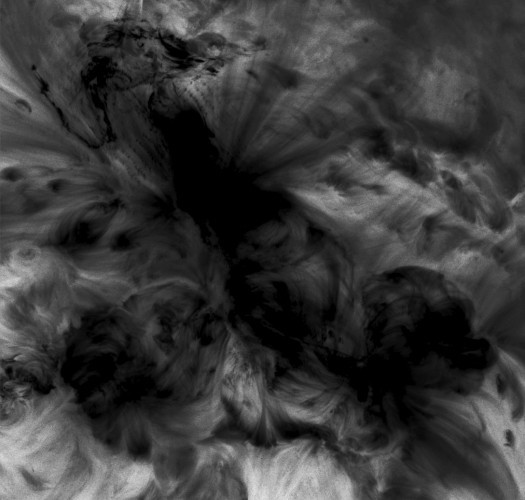 (DGR provides this collection of reviews of new releases by five bands. The first three reviews are collected here, and Part 2 will follow tomorrow.)

One of the fun things about just combing through Bandcamp and various other sites is the forehead-slapping discovery of releases that hit last year and flew completely under the radar. This one in particular hit in September of 2014, and yet it is one that deserves to get out there. We usually try to be on the somewhat forefront when it comes to new releases, but a late discovery is easily excused when we get to share it out there for all of you folk.

Extinction Event is a release that came floating across our desks courtesy of the band themselves a little while back, which is what led me traveling down the path to Blind Spite’s Bandcamp page and the constant listens I’ve given to the group’s EP since then. I’m leading off with it since it’s been in the hopper the longest and it is also one that will likely have vast appeal for our death metal readership.

Blind Spite are what I’ve gathered is a long-running band based in Carlisle, Cumbria, in the UK, a group formed in the late nineties with a bit of a history — one that has seen them produce a couple of EP releases and a couple of lineup shifts. The Blind Spite of today is likely much different from how they were when they started. For all intents and purposes, you could view this as a full-blown relaunch of the band and Extinction Event as the starting round, in all of its hollow and blackened glory — pulled from the same murky depths in which Ulcerate dwell.

When you choose to make your album art a desaturated photo of a sunspot, then I expect your music to be blisteringly heavy. If you’re going to invoke the sun and its magnetic phenomena, you have a lot to stand for. There’s a lot to be said for using a picture of a puppy as your album art — it builds no expectations of how goddamned heavy your album better be. Blind Spite, seemingly aware of the significance of their artwork, have made Extinction Event a crushing EP, with three of its four songs extending into the six- and seven-minute epic range. “Doubt”, “Infinity”, and “Construct” are the three huge songs that are the beef of this EP. Extinction Event’s opening track is its shortest and the most traditionally death metal, coming in at a fast three-minute blast with some black metal echo-heavy production on its guitars — the song itself closes with an extended scream that brings to mind “Forging Towards The Sunset” from Anaal Nathrakh’s Vanitas.

“Doubt”, “Infinity”, and “Construct” all feature their own spins, in order to keep the songs extending into the reaches of time. Some go for a doom-laden, slow-moving route while others becoming post-black to extended-blackened, blast-heavy songs. “Infinity” (whose name is marked by the symbol) is the black-metal-as-hell song on this release, so when Blind Spite refer to themselves as a blackened death metal band you know exactly what song is a huge part of where the “black” descriptor comes from, as it closes with some throaty groans. It can be viewed as a continuation of its predecessor, “Doubt”, in that it feels like an extended six-minute blast section after its opening harmonies. “Doubt”, though, goes from doom to black to insanity over the course of seven minutes and is one of the highlights of this EP.

As of now, Extinction Event is available at name-your-own-price, and “Doubt” alone makes that price worth it, without even considering the other three twisting and turning tracks committing to utter devastation over its close to twenty-minute run. 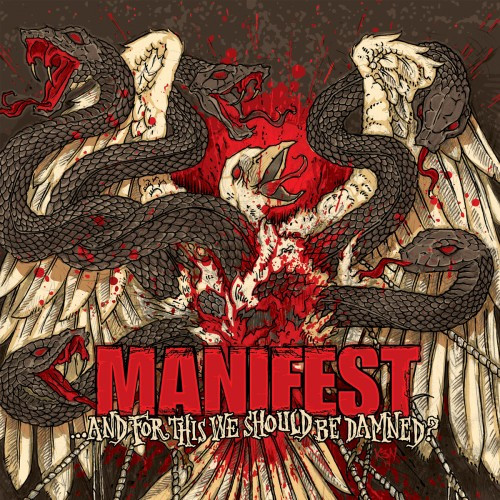 Manifest are a long-running band with a four-album discography based in Trondheim, Norway, that I only came upon recently thanks to my somewhat weekly cursory glance at the ViciSolum Records page — one that seems to be host to a lot of material that I’ve been chomping onto lately, Volturyon’s Human Demolition EP being the most recent. A combination of the album artwork heavily resembling the style used on some of Lamb Of God’s albums (only to discover it was, in fact, the same artist, going by the name of K3N Adams, behind them) and a title of …And For This We Should be Damned?, which carried the right amount of bitterness and spite, compelled me to give it a glance.

The group’s sound is commonly described as groove metal, but …And For This We Should Be Damned? sounds like a multitude of elements: the seething thrash of The Haunted, combined with a taste for punk, alongside the occasional love of a mathcore saxophone freakout and even the occasional blast of grind. Long story short, while the band do write fully composed songs, in their ten years of activity it seems like Manifest have acquired a taste for sheer anarchy in between their focused moments.

…And For This We Should Be Damned? is a topsy-turvy sort of album. It bounces between so many different forms while also constantly being on edge. It’s an angry fireball of a disc with just enough seething violence at its forefront to warn people that bad things could happen.

Two of the songs, “Seven Doors Won’t Do” and “The Cadaver On Your Mental Doorstep” are over six minutes and they are long, brooding pieces, while most of the more concise three-minute tracks bounce between the ghoulash of elements I mentioned earlier. “Stretched And Strung” contains the previously mentioned grind freakout in the middle of the song, while its follower “Violently Engaged” is a more traditional thrash-and-groove piece. Manifest work hard to keep a sense of danger in their music, and it shows all across …And For This We Should Be Damned? “Immune” is one of those cases, as it starts out feeling like another groove-heavy track, before giving into the temptations of a knife-sharp hardcore punk riff that carries the song.

…And For This We Should Be Damned can be purchased from the ViciSolum Bandcamp page if you enjoy the embedded stream below. The album was released at the tail-end of February, which means this is one of the most punctual things in this collection of music. 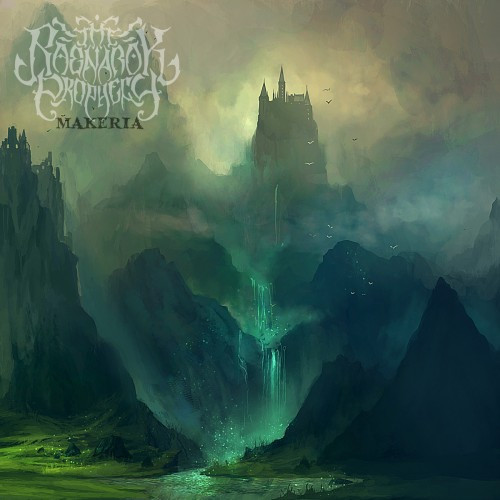 The Ragnarok Prophecy is a project we have been covering for a while, ever since some of its earlier releases — so it is one we do try to check in on from time to time. The Ragnarok Prophecy is a one-man project belonging to Southern California musician A.C. Riddle that has run the gamut of styles within the subgenre of melodeath, often erring on the side of its folksier paths. It began  on the amateurish side — one of the reasons that I first recommended it was for those who missed the earlier days of melodeath, with its sort of open-room production and hiss-filled sounds — but has grown tremendously as the man behind it has learned more and more about his recording rig, eventually leading to better recordings that have started to enable The Ragnarok Prophecy to meet its initial promises. It’s easy to say that this is a project that has improved by huge steps with every release.

Makeria is the latest in that slate, the recent follow-up album to last year’s The Dark Realms — keeping The Ragnarok Prophecy at a release frequency of about one per year. The recently released album is a concept disc, one telling of a civilization long past and laying the groundwork for future releases. If you’re one for lore, you can imagine this disc as a grand appendix to which this project will likely return, time and time again, to flesh out details.

Makeria sees The Ragnarok Prophecy adding some symphonic elements to its sound, mostly in song intros, and the music as a whole is still the mid-to-fast galloping death metal that had really been laid out on The Dark Realms. Immediate highlights on this one were: “Bringers Of Plague”, with its faster tempo for most of the song and probably the most traditionally death metal track on the disc; “The Prophecy”, another faster and folksier track; and “The Shrine”, which is one of the songs that is most reflective of the album as a whole.

Right now, like most releases from this project, Makeria can be downloaded at a name-your-own-price.