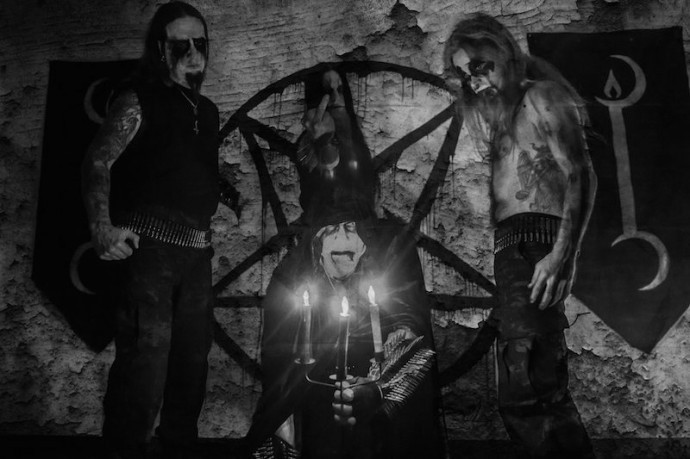 We have a video premiere for you. The song is brand new as well. It’s a stand-alone single by Idolatry from Edmonton, Alberta, Canada, and its title is “Clefs Au Chambre de Tristêsse (A Key To the Room of Sadness)“. It will appear exclusively on a split release with the Ohio black metal band Unrest. The video was created by Nashville-based NVS Productions, who has also produced videos for Wormreich (US), Hades (Norway), and Borgne (Switzerland).

Of course, you can skip the rest of this verbiage and just go hit the “play” button, but then you would miss a few warnings, which could be important for those with heart conditions or photosensitive epilepsy.

First, a warning about the music (or a teaser, depending on your tastes): This is grim, savage, skin-flaying black metal that cares nothing for trends. It is a horned salute to the regime of bands such as Gorgoroth, Behexen, and Sargeist. The music’s atmosphere is saturated with a sense of predatory menace and steeped in the ichor of gloom. When it’s not racing headlong in an explosion of barely controlled chaos, it’s stalking like a dirge. It’s also a riveting listen.

The production of the song gives the music a raw, abrasive tone, accentuated by bouts of bleeding feedback. The music gets under your skin and writhes like worms in your head. Its dismal melodies tend to stay in your head, too. The finishing instrumental segment over the video’s closing credits is eerie, dramatic, and powerful — and it offers no hope either.

The words of the first part of the track — uttered in a bestial, harrowing shriek — are in French. The track’s second half features a chanted poem in English constructed by the band’s vocalist Lörd Matzigkeitus entitled “Once Thought of Webs”. According to the band:

‎”Clefs au Chambre de Tristêsse” began as an unholy pact between Unrest and ourselves. It is a conjuration in French that weaves a tale of someone who has prepared a room to end their life in. Meticulously set up to capture the ultimate failure of hopes, lingerings and plans. A trembling hand holds the key towards the door… Knowing inside is finite.”

Now a few words about the video: It’s a dimly lit, unstable montage of flickering black-and-white images that become increasingly disturbing as the song unfolds. The dominant theme is death, and the effectively realized nightmare of the visuals turns out to be an inspired and haunting match with the music.

The song will appear exclusively on a 7″ vinyl split with Unrest entitled Infection Born of Ending. It’s limited to 40 hand-numbered copies and can be pre-ordered here (the release is expected in June):

4 Responses to “AN NCS VIDEO PREMIERE: IDOLATRY — “CLEFS AU CHAMBRE DE TRISTÊSSE (A KEY TO THE ROOM OF SADNESS)””