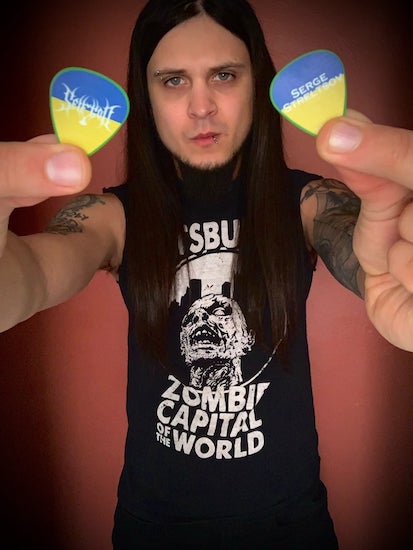 (The world turns, people leave us, and sometimes they come back. Florida-based Dan Barkasi wrote for NCS off and on in 2014-16, and now he has returned with the following interview of Serge Streltsov, the mastermind behind Pittsburgh-based Selfgod.)

Hard-hitting, uncompromising death metal is something that most who frequent NCS are kind of privy to. Just a tad, right? Mix that up with a dash of black metal underpinnings, and you have a recipe for something awfully delicious. Enter Selfgod.

The brainchild of Serge Streltsov (guitars/bass/vocals/keyboards), who plied his trade with Necrophagia and Automb in the past, you can hear how both of those bands played a part in shaping his new project Selfgod – quite literally, as you’ll soon read!

We discuss Selfgod’s debut release Born of Death in depth, along with Serge’s own story of his Ukrainian background and how his heritage is ingrained into both his music and daily life, and how he’s doing his part to help out those affected (and how you can, too). We also discuss Selfgod’s upcoming run of dates this month, the local scene in Pittsburgh, and other interesting topics. END_OF_DOCUMENT_TOKEN_TO_BE_REPLACED