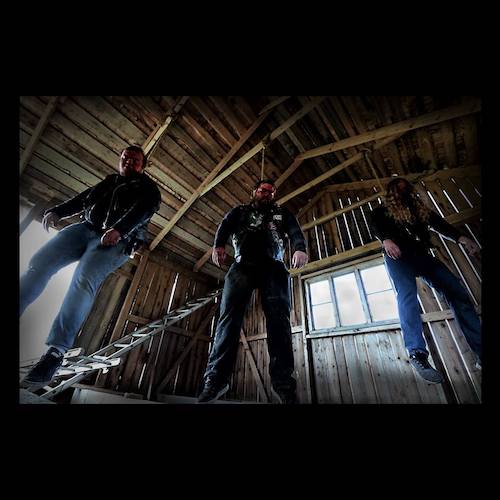 Shadowmaster is a Swedish power-trio: Cedermark (bass, vocals), Jumbo (drums), and Micke (guitars). All three played under the title Desert Crone since 2014, but a year ago they changed the name and soon released a self-titled full-length. The dudes perform cogent, forceful, and damned fierce and gloomy sludge-doom.

The material has a really strong delivery, and it’s absolutely heavy and well-produced. Heavy as hell, if you wish! Seeing Red Records gave the album the shape of a CD on December 22nd, 2017, so we had a talk about Shadowmaster and its stuff with Micke. END_OF_DOCUMENT_TOKEN_TO_BE_REPLACED

I’m beginning this collection with a new single by Minnesota’s Astral Blood, in part because it gives me the opportunity to post not one but two pieces of artwork by Luciana Nedelea that will cover the front and back of the album from which it comes. The album is named SYZYGY, and the front piece is above. This is the piece for the back cover: END_OF_DOCUMENT_TOKEN_TO_BE_REPLACED