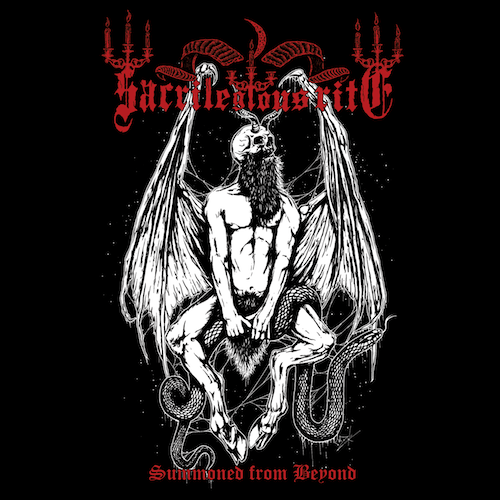 The discography of the German black metal band Sacrilegious Rite begins with the release of a 2011 split with Ungod, and another split four years later with Bestial Holocaust, followed by their own three-song demo, Black Curses of Death (2015) and a three-way split with Dethroned and Goatblood the following year. Yet the band’s origins can be traced further back in time, to a group named Captis Damnare that was spawned in the late ’90s; the dissolution of that band led to the birth of this one. And now at last they have recorded a debut album named Summoned From Beyond that will be released on November 13 by Dunkelheit Produktionen.

Two songs from the album have appeared already — “Sacrilegious Rite” and “Deathstalker“. We have a third one for you today, this one named “Nocturnal Blood Consecration“. END_OF_DOCUMENT_TOKEN_TO_BE_REPLACED

I’m beginning this collection with a new single by Minnesota’s Astral Blood, in part because it gives me the opportunity to post not one but two pieces of artwork by Luciana Nedelea that will cover the front and back of the album from which it comes. The album is named SYZYGY, and the front piece is above. This is the piece for the back cover: END_OF_DOCUMENT_TOKEN_TO_BE_REPLACED