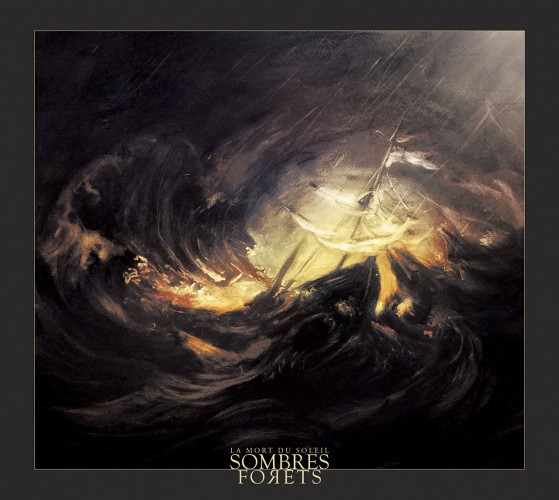 (BreadGod returns with his third guest review of this week, this time discussing the new album by Sombres Forêts from Montréal, Québec, which features this beautiful album cover by Fursy Teyssier.)

There was a five year gap between the release of Royaum De Glace and the release of Sombres Forêts’ latest album, La Mort du Soleil. During that time, the depressive black metal bubble burst from over-saturation by shitty bands. Now the scene is, for all intents and purposes, dead. Of course, that hasn’t stopped Sombres Forêts from releasing their new album in this barren wasteland people once called a scene. In fact, Annatar got together with his friends in Gris and they released both of their latest albums around the same time. I really liked Gris’s latest offering (reviewed here). Let’s hope I can say the same about Sombres Forêts’.

The first song is a beautiful non-metal piece that consists of acoustic guitars and low, droning, clean vocals that eventually transition to pained screams that echo far off in the background. After a while, it morphs into a strange experience where the drums and distant riffs play backwards. It’s quite unsettling, and teaches you to not jump to conclusions so quickly. After a minute of that, we go back to the acoustic guitars. This proves that the album is going to be unpredictable.

The depressive black metal on this album is a bit more unorthodox this time around. The drums are more prominent in the mix and the guitars seem to be off in the distance, like a ghost ship shrouded in fog. This setup might take some getting used to, but it’s all worth it in the end. The drums display even more skill than they did on Royaume De Glace. Their beats are more complex, the cymbal work more intricate, and there are many more fills. Thanks to the more professional production, they also feel much more powerful. Another improvement is in the increased prominence of the bass. It plods alongside the guitars and makes the music feel more rich and full. END_OF_DOCUMENT_TOKEN_TO_BE_REPLACED