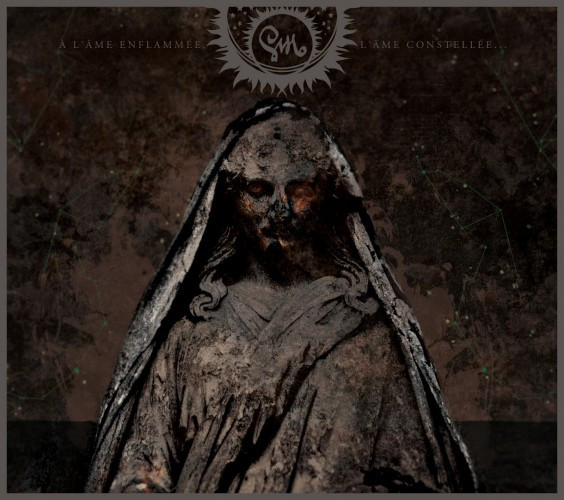 (Guest writer BreadGod contributes this review of the latest album by Canada’s Gris.)

I can’t believe it’s been almost six years since Gris released Il etait une foret…, one of the best depressive black metal albums ever recorded. As I said in my review of Thy Light’s No Morrow Shall Dawn, the depressive black metal scene became oversaturated with shitty bands shortly after the relese of Austere’s magnum opus To Lay Like Old Ashes. The scene then collapsed under the weight of all the shitty music and everyone moved on to the next, latest trend. This means that Gris just released their latest album, À l’âme enflammée, l’äme constellée…, to an empty house.

However, they’re not going to let this discourage them. They’re so confident in their musical abilities that their latest endeavor is ninety minutes long and comes on two discs. That’s ambitious. It’s almost as ambitious as Elysian Blaze’s Blood Geometry. Let’s just hope it was worth the wait.

The first thing I noticed was just how powerful the production is. It is so bold and powerful, and every instrument comes in as clear as day. Gris are making it obvious that they’re not a group of teenagers recording half-assed black metal in their parents’ basement. What they’re doing is a labor of love. This album is a true display of professionalism.

To be perfectly honest, due to how long this album had been in production, I thought they would change their formula so much that it would make me scream “BETRAYAL!” Luckily, it’s the same Gris I know and love. The drums play lots of double-bass as well as some really extravagant fills. They even play a few blast beats, such as those on “Igneus”. I especially love how powerful the snare sounds. They refuse to fall victim to the loudness war. The Austere-like screams still exude as much agony as they did on the last album. Icare found a vocal style that works and now he’s sticking to it. However, there is this one moment where he performs low, droning, clean vocals that provide a nice change of pace.

As for the guitars, they sound less like Burzum and are now focused on creating their own identity. The riffs are starting to take on a post-metal quality. I even hear a touch of avant garde in there. And of course, Neptune still plays those high-pitched lead riffs I enjoyed so much on songs like “Cicatrice”. One difference I’ve noticed is that the bass is much more prominent in the mix. It plods alongside the guitars and gives the music an extra layer of depth.

Their previous album, Il etait une foret…, featured a lot of non-metal elements, and this album includes even more of them. First, they include a lot more acoustic guitars, piano, and violins. Most of the time these help reinforce the somber mood of the album. However, there are moments where the acoustic guitar sounds much more joyous, such as on “Dil”. I especially love the band’s use of violins. They help make the music sound more rich and full. There are even times when these non-metal elements can sound scary, such as on “Samsara”.

As I wrote earlier, I was scared when I pushed play. I thought Gris would have changed things for the worse. The album cover is not something you would find on a depressive black metal album. They even went so far as to change their logo. That alone sent up red flags in my mind. Luckily, they didn’t change much when it came to the music. The black metal sounds more or less the same as it did on Il etait une foret…, and I especially loved the wider range of non-metal elements. The ninety-minute length may seem daunting, but it’s definitely worth a listen.

This is a slightly edited version of a review that originally appeared at The Autistic Metalhead blog. The album is available from Sepulchral Productions via this link.