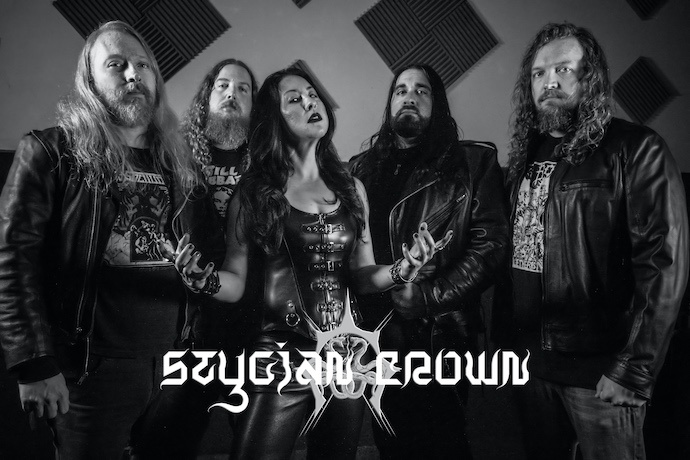 (On June 26th Cruz Del Sur Music will release the debut album of southern California’s Stygian Crown, whose music conjures thoughts of Candlemass and Bolt Thrower melded together — “Candlethrower” sounds. And in this new interview Comrade Aleks spoke about the music and the band’s origins and processes with three of its members.)

Rhett A. Davis stood at the roots of the Amercian doom-death scene. He’s one of Morgion’s founding members, he took part in the practices of Crimson Relic/Divine Eve, and he had the Keen Of The Crow band, who also followed a similar musical direction. Besides that, since 2001 he has performed drums in the death/black/thrash band Gravehill.

So in around 2018 he and two of his Gravehill companions Jason Thomas (bass) and Nelson Miranda (guitars) started the traditional doom band Stygian Crown, and the band got a real push when Melissa Pinion (keyboards, vocals) and Morbid Eclipse’s man Andy Hicks (guitars) joined their ranks.

How hard could the doom metal be when there are three men in the band from such an extreme crew as Gravehill? Let’s find out with Andy, Melissa, and Rhett, who are going to tell us a few details about Stygian Crown‘s forthcoming self-titled release. END_OF_DOCUMENT_TOKEN_TO_BE_REPLACED