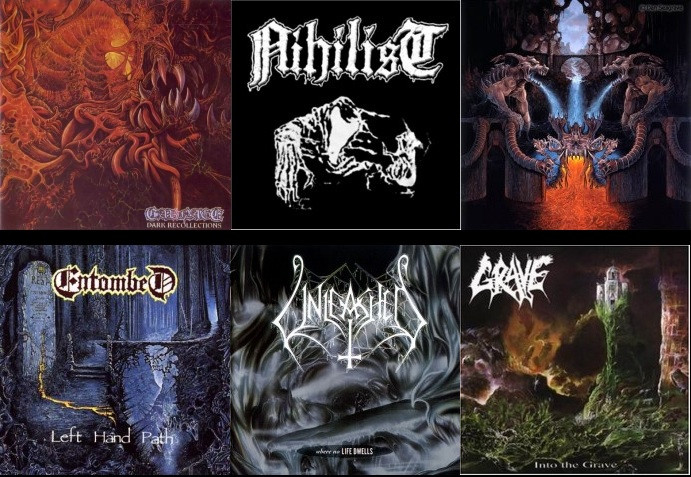 Earlier this week I reviewed a great new album by Blood Mortized that’s in the vein of old school Swedish death metal, which happens to be one of my favorite metal sub-genres. One of our frequent commenters suggested that I consider compiling a list of my favorite “regurgitated” Swedish death metal albums since 2000 — and by “regurgitated” I took him to mean albums released by bands who weren’t actually in existence back when that old school was being constructed by the likes of Carnage, Nihilist, Dismember, Entombed, Unleashed, and Grave (to name only some of the ground-breakers).

I’m not very good at making lists. I have a hard time ranking bands and albums and I’m always afraid I’m going to forget something. Also, trying to make a list of albums that have come out over the last 13 years seemed like an especially daunting task for my feeble mind. But I did decide to create the list you’re about to see. Though it’s quite long, I’m still afraid I’ve forgotten something, or simply never heard an album that deserves to be mentioned. So I’m encouraging readers to add their own favorites in the Comments if I left any of them out. But first, I want to be clear about the criteria I used — and I want to provide some caveats, too.

1.  I limited the list to albums that were released from 2008-2013 (the last 5 years). Apart from the fact that this was easier, I think it’s also the period when we’ve seen the biggest resurgence in this style of metal among newly released albums and EPs.

2.  I excluded bands who existed back in the late 80’s and early 90’s when this style of music was being born, even if they’re still around (e.g., Grave) and even if they broke up and then later re-formed (e.g., Evocation, Interment). On the other hand, I didn’t exclude newer bands just because their line-ups might include people who were involved in other bands during that era.

3.  I tried to limit the list to bands whose sound is significantly influenced by that old school SWEDISH style, as exemplified by the bands mentioned above (though the listed bands are from all over the world).