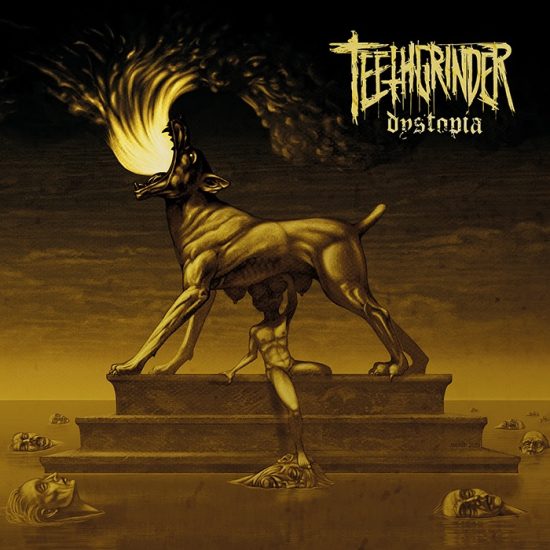 (The Dutch band Teethgrinder released a new album through Lifeforce Records in the latter part of July, and we follow that today with DGR‘s review of this new record.)

When it comes to the type of music Teethgrinder make there isn’t really a concept of ‘doubling down’ on anything. For three albums – including this newest release – and an introductory EP, Teethgrinder have already existed at maximum volume and intensity. There’s no doubling of anything left here. Every song is an explosion from the start. and a lot of times they sound like they’re on the edge of a frenetic internal collapse.

Both Misanthropy and Nihilism were already excellent examples of the sort of high-volume attack available to the band, and if you’ve been following NCS for a while you’ll know that we’ve been banging the drum about both for a while. This is probably why it actually came as a surprise to discover that the gap between Nihilism and the group’s newest album Dystopia is almost five and a half years; it really doesn’t seem like the band have ever stopped.

Nihilism had such a long-burning flame here that it only just now seems like it has embered out a bit, and so Dystopia arrives at a perfect time. Yet it’s in a weird position, since we now have to ask if ‘if there’s nothing for the band to keep hammering on, then what direction is Dystopia left to travel in?’ END_OF_DOCUMENT_TOKEN_TO_BE_REPLACED