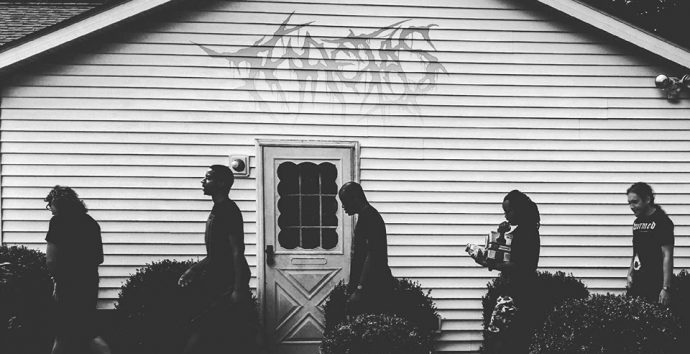 (Austin Weber introduces our premiere of a song by the New York band Thaetas off their forthcoming 2017 album.)

Right now I’m kicking myself, because I could have sworn I covered this year’s Thætas three-song demo here at NoCleanSinging, but it seems that so far I only wrote about it at Metal-Injection. Technically, they did get name-dropped here recently when we covered the new Buckshot Facelift, but that’s because Buckshot Facelift shares a guitarist with Thætas. So, for anyone who is new to the group, gather round, because Thætas are a very promising new band you need to check out.

Today we’ve got an exclusive premiere for you of “Isixhenxe”, a live-in-the-studio recording of a new song by the band that will be appearing on their full-length that’s planned for a 2017 release. Given that, it’s a bit on the raw side production-wise, but I think it gives the song a grittier feeling that I can get down with all the same. Overall, Thætas state that they are a brutal death metal band, but given the diversity in their music, they really deserve a shot from a lot of people who normally aren’t into that sound. END_OF_DOCUMENT_TOKEN_TO_BE_REPLACED