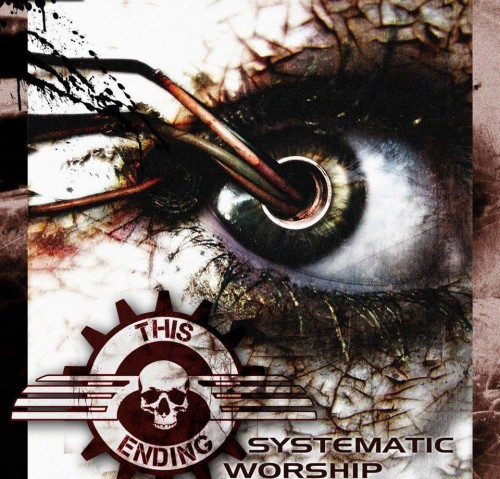 (DemiGodRaven reviews the new EP by Sweden’s This Ending.)

Man, the artwork makes me uncomfortable. There’s just something about anything being done to the eye that really tends to get under my skin. I don’t know what it is. I can watch some of the goriest stuff ever made, but seeing things happen to either the eye or the fingernails really gives me the willies (penis!), even in artwork form. I shredded about four thousand different zombies to pieces in Dead Space 2, but that scene where you need to put a needle in the protagonist’s eye was the part that got to me. It is hard to tell whether the fact that the artwork for This Ending’s new EP Systematic Worship reminds me of this is a good thing, but the art is definitely evocative.

This Ending are a Sweden-based melo-death group who have been going for a while now, but recently seem to have been reactivated. You’re probably familiar with their name from seeing it on sites such as Blabbermouth alongside the headline “Amon Amarth Drummer’s Band, This Ending…” Fredrik Andersson is indeed the most famous member, but the band have been going strong without a lineup change since 2005, managing at least to release some form of new material about every three years.

They’ve actually had many names and an even longer history prior to that (which you can read about on their facebook page), but I’m  focusing on the group’s most recent slate of material: 2012 has brought this self-released three-song EP instead of a full blown album. Also, as a bonus, I have found that you can download two of three songs for free on both their Reverbnation and Soundcloud pages.

One of the luxuries of reviewing such a small EP is that it allows the writer to really drill down and discuss each song. I don’t feel that Systematic Worship necessarily demands or warrants that kind of detailed treatment, especially since two of the songs are available for free, but it might still be useful to give you at least a description of where you’re headed and thoughts about whether any of this is worth your time. END_OF_DOCUMENT_TOKEN_TO_BE_REPLACED