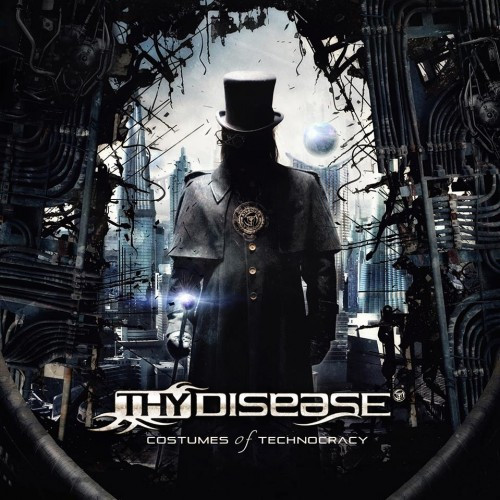 (DGR reviews the sixth studio album by Poland’s Thy Disease, released in February 2014.)

Industrial hybrid genres are an oddball entity to write about when it comes to heavy metal. Often it feels like bands don’t have enough industrial elements and at other times it feels like those are are overwhelming the others to the extent that the remaining piece of the descriptor might as well not even be there. There are people who do get it correct, but it seems to have become the go-to for any band that adds some distorted whirs, buzzes, keyboards, and such, that they wind up with an “industrial” in front of their name.

Industrial Death often finds itself in that weird push-pull dynamic, having morphed into a groove-focused genre with very little of the actual death metal side present — namely, just growled vocals  and the occasional blast-beat battering. It’s also a very wide genre that has become a huge umbrella term for bands who might otherwise be characterized as symphonic or something else entirely. Long story short, it’s hard to tell if seeing a band described as Industrial Death Metal actually means anything at first glance, other than allowing you to infer that at some point there will be electronics in the mix.

Poland’s Thy Disease are one such band, a group who have adopted the “industrial death metal” descriptor as part of their image, playing up the “music made by and for Terminators” aspect of it while incorporating many of the aforementioned groove-heavy and instantly neck-bobbing riffs in their music. The band have been long-time staples of my personal Last.fm recommendations — one of the groups that I feel like I’ve listened to more on that site despite having a copy of Anshur-Za (their 2009 release) lying around in my house. END_OF_DOCUMENT_TOKEN_TO_BE_REPLACED

Interestingly, the only instruments used on the album are guitar and drums (no bass), but “Spit” is still plenty heavy. Comparisons have been drawn to the likes of Melvins, Motorhead, and Darkthrone. “Spit” is a black, hammering rocker with a boatload of fat, distorted riffs and a drum attack that seems bent on dismantling skulls. It’s catchy as fuck, and Mantar’s vocalist has the kind of raw, scarring tone that leaves faces in shreds. Excellent nastiness. END_OF_DOCUMENT_TOKEN_TO_BE_REPLACED