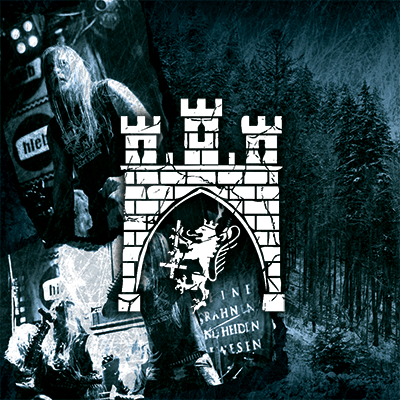 In this post I’ve collected three new songs I heard earlier today that I wanted to recommend. They’re all quite different from each other, sharing only a common devotion to the darkness.

Long-term NCS readers will know this Ukrainian band because I’ve written about them so often (their 2011 album Schwarzpfad was probably my favorite black metal album out of all the ones I heard last year, and I included a song-stream from the album on our list of the 2011’s Most Infectious Extreme Metal Songs). But we continue to pick up new readers at a steady clip, and the band’s new recording gives me an excuse to introduce them to our new followers.

As previously reported at this site, Kroda will be releasing a live album in the form of a combined CD and DVD under the title HelCarpathian Black Metal – Heil Ragnarok: Live Under Hexenhammer, which was recorded and filmed in Moscow. Today the band announced that mixing and mastering of the album is now complete and that it will be released as a digipack edition later this winter. They also released one of the live tracks for streaming.

It’s a cover of a song called “Noregsgard” by the Norwegian band Storm (which included Fenriz [Darkthrone] and Satyr [Satyricon]) from their 1995 Nordavind album. I believe the song, even as originally recorded by Storm, was a metallicized version of a folk tune, and Kroda’s performance, which includes both flute and clean vocals, definitely has a pagan/folk air. But it’s still pretty fuckin’ heavy. I like it a lot. END_OF_DOCUMENT_TOKEN_TO_BE_REPLACED