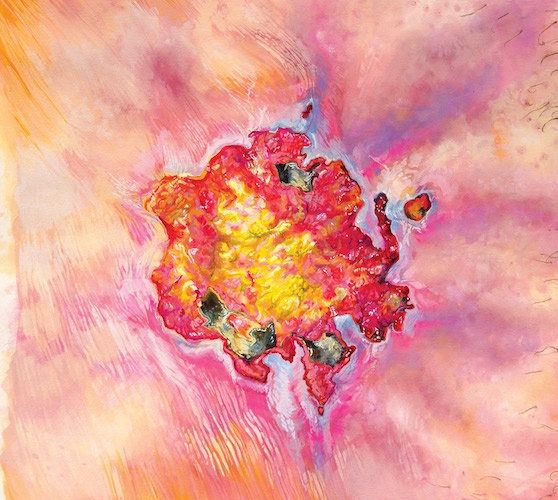 If you leave a sick person in one position for too long, unable to move by themselves, the mere pressure of their own weight on the bed will open draining ulcers in the skin. If untreated, the ulcers may penetrate to the muscle and the bone. Some may never completely heal.

That image, and the band’s name, are of course metaphorical. What comes through in the music of this new album, False Confession, is the sound of other wounds, of damage to the psyche and the soul brought about by other kinds of untreated pressures, some self-imposed, some inflicted as a consequence of abandonment by others, of being left in dire straits and unable to move without help, which never comes or arrives too late. Even when help comes, scars remain.

The title of the opening track on False Confession refers to scars — “Scars Whispering Secret Tongues”. As an opening statement, it makes a stunning first impression, even if you had some inkling of what might happen based on exposure to Weeping Sores‘ self-titled EP released in 2017. END_OF_DOCUMENT_TOKEN_TO_BE_REPLACED

As previously reported, Nashville’s Loss have a new album named Horizonless, which is due for release by Profound Lore on May 19. We finally got a taste of the new music last week through the premiere of a track named “All Grows on Tears“. END_OF_DOCUMENT_TOKEN_TO_BE_REPLACED