Much as I hate to do this, I’m going to resort to the format I used last Saturday when I was similarly pressed for time — just serve up some of the new songs and videos I’d like to recommend from what I’ve encountered this week, sans verbiage from me (except in one case). I’m probably going to do the same thing tomorrow, because I have a long list of recommendations.

My shortage of time is going to persist from now through the weekend, thanks to travel, meetings, and nose-to-the-grindstone efforts required by that thing that pays all the bills around here (my fucking day job). END_OF_DOCUMENT_TOKEN_TO_BE_REPLACED 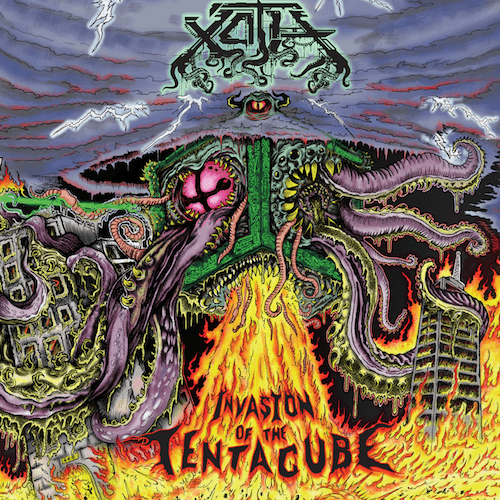 In the distant future when the Tentacube invades our pitiful, beleaguered planet (by which I mean three days from now, on the other side of our ghastly election), the widely differing strands of extreme metal will be fused into a single, monstrous, throbbing tentacle groping for your pleasure centers. By which I mean that Seattle’s XOTH will release their debut album, Invasion of the Tentacube, which you will be able to hear in its entirety below.

It may be an exaggeration to claim that XOTH have fused together all of the divergent strands of metal into a single heavy chord, but it’s true that attempting to cabin this head-spinning collage of sounds within a few simple genre terms would be a fool’s errand. The part about the pleasure centers? That’s totally true. END_OF_DOCUMENT_TOKEN_TO_BE_REPLACED