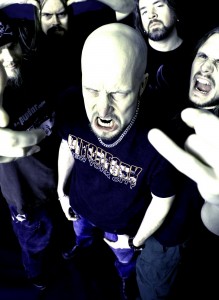 This is turning into video day at NCS. Not like that was our purpose when we rolled out of bed this morning. Just happened. We saw the new video released yesterday by Living Sacrifice and put that up. We put up a piece on Brutal Truth and decided, what the hell, maybe some of you haven’t seen the vid of “Sugar Daddy,” so that’s up too. And then we saw that today the almighty Meshuggah had released a video trailer for their forthcoming DVD/CD combo, Live, which is set for U.S. release on February 9. And you know, as short teasers go, it does the trick — if you’re a Meshuggah fan (as we are) it will get you hot and bothered. So watch it after the jump, along with the other videos with which we’re filling up the page today, and then come back a little later and see our eighth entry on the Ten Most Infectious list.