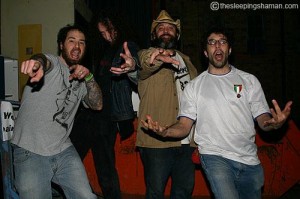 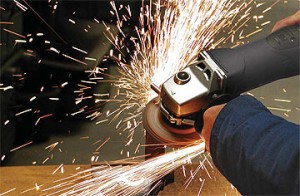 Are you having one of those days when it seems like the whole world is made out of sharp edges? Where all the people you encounter just seem pointed and cutting? Where even the light feels like daggers in your eyes? Where you begin to think your skull itself is filled with razor blades? Well, my friends, what you need is a little industrial strength grind action.

We’re way behind in taking official notice of the legendary band’s April 2009 full-length comeback, Evolution Through Revolution. We forgive ourselves, because Brutal Truth was way behind in giving it to us: it’s their first studio album since 1997.  Let me say that again: 1997.

This has been an awesome year for grindcore. We’ve seen absolutely killer new releases from Napalm Death, Agoraphobic Nosebleed, and Insect Warfare (OK, it’ a re-release, but WTF) just to name a few. But as much as we liked those albums, Evolution Through Revolution leads the pack. We can’t lie — some of the appeal is undoubtedly rooted in the fact that this band was one of the godfathers of grind but has been missing in acton for so very long — and we’re just so fucking psyched to have them back!

But don’t be misled: Evolution Through Revolution isn’t some half-assed re-tread designed to capitalize on fan nostalgia. Brutal Truth is not just back, they’re back in full cataclysmic force and pushing the envelope again. This is 20 songs in about 40 minutes of absolute blast-furnace, no-bullshit, grindcore violence. The addition of shredtastic guitarist Eric Burke is part of the new life this band breathes into grindcore, but only part of the story. There is so much going on in this album, so many interesting variations on the classic grindcore template. Far from 20 copies of basically the same sound, the songs on Evolution Through Revolution are varied, often experimental, but always furiously scorching.

If we’re lyin’, we’re dyin’: Put this sonic grinder to good use on all those sharp edges in your life. You’ll be glad you did!

And if you’ve somehow missed the band’s out-of-the-ordinary video of “Sugar Daddy” (complete with ragtime piano to begin and end), check it out: