And then in 2007, everything more or less started going downhill. In January of that year, Bruso left the band. BYD released a statement reporting that Bruso “has come to a point in his life where he must focus on more important things like going back to school to become a teacher and his upcoming marriage.” (I’ve seen a report that he’s currently working in a special education classroom at a middle school in Maynard, Mass.) BYD replaced Bruso with Myke Terry, and, as if to announce to the world that the band was starting over, the next album was self-titled Bury Your Dead. (more after the jump, including some before-and-after video . . .) 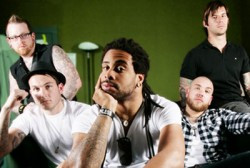 More or less overnight, BYD shifted from a heavy-ass, metal-infused hardcore band to generic metalcore with lots of clean singing. Don’t get me wrong: Myke Terry seems like a cool dude, and he’s a good singer — if you like that kind of more melodic metalcore thing. But I was enormously pissed off by what had happened. In fact, the morphing of BYD was what was uppermost in my head when I suggested to my co-authors that we name this site NO CLEAN SINGING and when we said this on our first post:

“In our evolution as metal fans, your Authors have reached the point where  we want to vomit when otherwise promising metal songs with good riffage and crushing drumwork are interrupted by an attack of clean crooning, particularly the breathy, whiny, upper-octave kind of excretions that used to characterize a lot of metalcore but still pops up in even the most unexpected places.”

BYD has been on my mind lately for a couple of reasons.  First, a new tour was announced two days ago. BYD is hitting the road with OTEP, Through the Eyes of the Dead, and Destrophy. You can find the dates and places here. They’re even coming to Seattle. Gotta think long and hard about whether it’s worth going to that show.

Second, two days before that tour was announced, there was a report that For the Fallen Dreams guitarist Chris Cain had left FTFD and has been playing bass for BYD, which tends to confirm the rumor circulating in October that BYD‘s bassist Aaron “Bubble” Patrick had left the band. Another bummer, as far as I’m concerned.

BYD isn’t the only metal band that’s shifted from “heavy” to “lite” over time. I’m sure you can think of others. I’m assuming BYD‘s revenues have gone up as a result of the shift; they’ve certainly developed a bigger “crossover” fan base. But Beauty and the Breakdown will stay in my car. Am I being to harsh??

Now, for some “before and after” video. First up: the clip of Mat Bruso taking one to the head on-stage during the filming of Alive.  After that: a video of BYD in its new , post-Myke Terry incarnation.

2 Responses to “BEFORE AND AFTER”