And for the cherry on top, we got to see three of the most charismatic frontmen in the business on one bill: Dez Fafara, Frank Mullen, and Ben Falgoust (and J. Costa is no slouch either). What a truly ass-kicking way to start a new year of live metal in the Emerald City! Now, for a few details about each band’s performance (after the jump).

The show started early, and unfortunately our daytime commitments prevented us from getting our asses over to Studio Seven in time to catch this local death metal band, about which we’ve heard good things. Hope we’ll get another chance to see ’em live soon.

THY WILL BE DONE 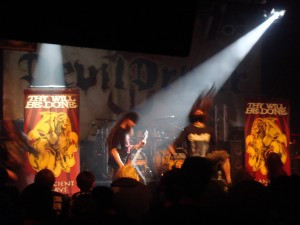 This Rhode Island band’s 2009 release In Ancient of Days was a killer album, and we had high expectations about seeing them live. Man, they did not disappoint! A high-energy, high-intensity set of groove-oriented, thrash-influenced heavy metal with powerful harsh vocals by J. Costa — who was in constant motion from start to finish. They got heads banging from the start, and the pit had begun to roil by the time their brief set concluded. I hope they come back this direction soon! 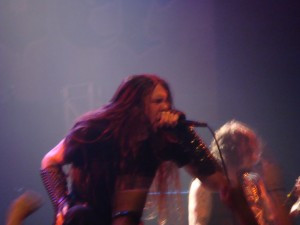 This band’s 2009 release Carving Out the Eyes of God catapulted these dudes from NOLA onto lots of “Best of 2009” lists (including our list of the Ten Most Infectious Extreme Metal Songs of 2009), and we were blown away by their live performance in Seattle last summer with Daath, Abysmal Dawn, and Abigail Williams.

Last night’s performance was at least the equal of that 2009 show. Driven by the masterful guitar work of Sammy Duet and the magnetic, high-energy presence of vocalist Ben Falgoust, Goatwhore ratcheted up the intensity level in a crowd that was primed and ready for their unique, Americanized version of blackened death metal.

And man, does Ben Falgoust have a great voice for this shit — like a bushel of gravel being forced through a wood chipper.

Random stage banter from Ben: “Don’t say Hail Satan unless you mean it! Unlike the man upstairs, he doesn’t ask for your money, he just wants you to have a fucking good time!” 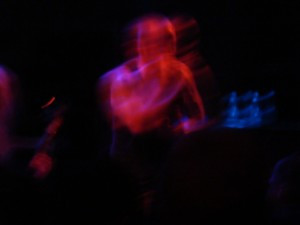 No secret that your NCS Co-Authors are huge fans of this legendary death metal band from Long Island. We caught them in Seattle last year in a much bigger venue, and for me they were the high point of that heavily populated tour. This time, we got the chance to watch them close up in a club setting, and it was an eye-opener.

The band played a wide range of older and newer songs, including “Catatonia,” “Cataclysmic Purification,” “Suspended in Tribulation,” “Blood Oath,” “Come Hell or High Priest,” “Pierced From Within,” and “Liege of Inveracity.” There are mosh-inducing crowd-pleasers on that list, but also some extremely intricate music with multiple tempo shifts and start-stop time signatures that just makes you stop and stare in wonder.

Mike Smith (drums), Derek Boyer (bass), and Guy Marchais laid down a completely in-sync, ultra-heavy low end, allowing Terrance Hobbs to really shine on the leads. All of these dudes are superb musicians, and were completely focused and concentrated on delivering a flawless execution.

Of course, they didn’t need to divert themselves from their playing by stage antics, because their larger-than-life frontman Frank Mullen more than took care of that. It’s really hard to take your eyes off that dude — just a fully electrified live-wire thrashing around the stage with barely controlled insanity. Overall, a masterful, pummeling performance by some dudes that have been doing this shit longer than many in their audience have been alive. Think of an acetylene torch to the face with jet engine backwash for accompaniment.

Random stage banter from Frank the Tank: “At some point we all took a blood oath to death metal, to extreme metal, call it what you want! And that’s what this shit is about!” 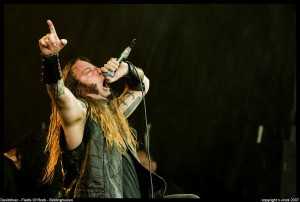 To be honest, going into this show, DevilDriver was the least of the attractions on the bill for your NCS Co-Authors. DD’s brand of infectious groove metal has definitely got its attractions, but we’ve never been huge fans of their albums.

But now I get it: DevilDriver music is meant to be heard live in a densely packed throng of chaotic humanity. From the first blasting notes of the first song, the crowd at Studio Seven surged forward and immediately started roiling in a massive, densely packed pit that didn’t let up until the band walked off the stage at the end of the night.

And there was no let-up on stage either — the intensity level was in the red zone from start to finish. Dez Fafara knows how to work a crowd into a lather, and that’s exactly what he and his bandmates did. I’m impaired in my ability to tell you much about what songs were being played or even how well they were being played. I got caught up in the pit — basically no way to avoid it unless you wanted to hide in the john — and just drowned in a electrifying maelstrom of machine-gun noise and swarming bodies.

About the only pause in the chaos occurred before the final song when Fafara commanded that the crowd part and move out to the perimeter of the floor. I was thinking, wall of death?! No — a huge circle pit that didn’t stop until the band did.

I’m still not sure I’ll listen to DevilDriver’s albums any more often than I did before last night, but I’ll say this: performing on stage, that is one kick-ass band that knows how to connect to the reptile part of your brain and get you partying. One of the most viscerally consuming live shows I’ve yet seen.

Random stage banter from Dez (undoubtedly to the delight of the Studio Seven security dudes): “This stage is as much yours as it is ours! So get your asses up here with us!” (followed by much crowd surfing and stage-diving)