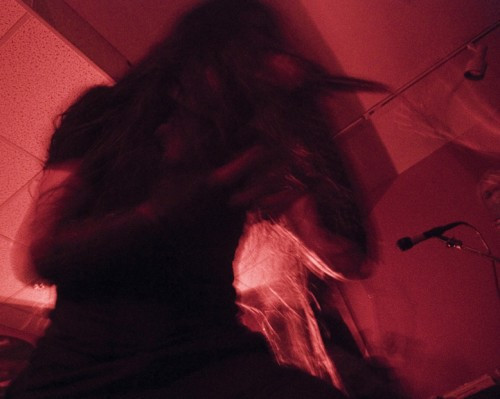 (BadWolf and friends attended a special performance by Goatwhore in Toledo on March 7. This is his review, plus his on-site interview of Ben Falgoust and Sammy Duet. All photos accompanying this post were taken for NCS by Nicholas Vechery.)

I’ve had the most rotten luck with local shows lately. That awesome Black Dahlia Murder/Skeletonwitch/Nile tour was supposed to come through my hometown, as was the Faceless/Dying Fetus/Goatwhore tour. Both of those were cancelled. In fairness, the Black Dahlia Murder decided to headline a huge local metalcore festival—the Jamboree—instead, but I’m no huge proponent of skinny-jean deathcore. Thank god (or satan or wotan or whatever) for Goatwhore, who decided to play Toledo anyway—for free.

Goatwhore picked the perfect venue: Toledo’s finest record store, Ramalama Records. I have a long history with the establishment; it’s fair to say I would not be a metalhead were it not for the owner, Rob, and his clerk, Nick. A story within a story:

I rode into the store on bicycle on a Saturday afternoon at the age of 15. I was dressed in black jeans and a Master of Puppets tee-shirt—Nick said I was the first cool-looking guy to enter the store all day, and as such if I bought a record the second would be half off. A sick deal, but I had no idea what to get, so I just pointed at my tee shirt and said “Stuff like this.”

Nick picked out Municipal Waste’s Hazardous Mutation record. “What’s that sound like?” Nick threw it on the stereo.

“The good old days,” he said. Twenty seconds into ‘Unleash the Bastards’, I said he had himself a deal.

For my second buy I took a gander at the new releases shelf, and a  record cover caught my eye—some really great art of a ship being sunk by a whale. The band was called Mastodon. The album, obviously, was Leviathan. Nick let me listen to “Blood and Thunder”, and that was the end of normalcy in my life. $20 or so later, I was in metal for life. END_OF_DOCUMENT_TOKEN_TO_BE_REPLACED

No, you didn’t come to the wrong site by mistake. This isn’t a sports blog, no way no how. But we gotta make one tiny exception today, not just because today is Super Bowl Sunday — because that alone wouldn’t be enough to cause a departure from our usual subject matter — but because it’s Super Bowl Sunday AND THE NEW ORLEANS SAINTS ARE PLAYING!

Besides, if the Saints lose there will still be a bigger party in NOLA than there will be in Indianapolis if the Colts win.

So, we gotta show the Saints some love today, and in honor of the occasion, who better to bring you some parting thoughts before gametime than Ben Falgoust and Sammy Duet from Goatwhore — one of the best extreme metal bands in creation (and certainly the best from New Orleans).

So watch it.  It will bring a big smile to your face, and you’ll also see where the title to this post came from.

And for the cherry on top, we got to see three of the most charismatic frontmen in the business on one bill: Dez Fafara, Frank Mullen, and Ben Falgoust (and J. Costa is no slouch either). What a truly ass-kicking way to start a new year of live metal in the Emerald City! Now, for a few details about each band’s performance (after the jump). END_OF_DOCUMENT_TOKEN_TO_BE_REPLACED