Seems to us that Mr. Rollins has hit the fucking nail on the fucking head. His words resonated in our addled brains as we browsed the latest metal news on Blabbermouth this morning. There we saw the following reports about the following bands/performers — all on the very first page of Blabbermouth reports. My mood?  Bored shitless.

Hardcore legends Agnostic Front will be performing a headlining show in Brooklyn on February 26 in connection with the re-release of albums from 1983 and 1984 . . . . “‘We haven’t played together since ’84, this is the CLASSIC lineup together again doing vintage AF songs and some classics. We couldn’t be more excited to do this!” said vocalist Roger Miret.'”

“During VELVET REVOLVER/ex-GUNS N’ ROSES guitarist Slash‘s appearance at the Marshall booth at this year’s NAMM (National Association Of Music Merchants) show on Saturday (January 16), it was announced that his debut solo album, “Slash”, will be released in the U.S. on April 6. . . .” 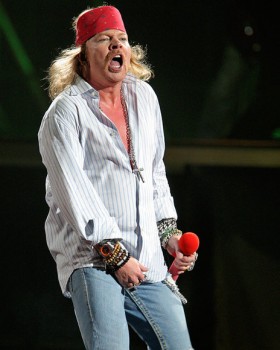 “According to promoters Zed! and Venezia Spettacoli, the “Classic Rock Night” featuring the IAN PAICE & TOLO MARTON BAND on February 4 at Gran Teatro in Padova, Italy, will be a celebration of the 40th anniversary of DEEP PURPLE‘s “In Rock” album and will also mark 40 years since the passing of Jimi Hendrix. It will showcase a project which Paice and Marton have been working on together. The setlist will include a DEEP PURPLE tribute, a few TOLO MARTON tracks, a few HENDRIX tracks and a rock medley inspired by movie soundtracks. . . .”

“Swiss hard rock veterans KROKUS will release their new album,“Hoodoo”, on February 26 . . . . The classic KROKUS lineup reunited for an appearance on November 18, 2007 on a TV show honoring the greatest Swiss songs of all time.”

And if this wasn’t bad enough, I had the misfortune of seeing on Metal Sucks the recent photo of Axl Rose that we’ve added to this page. Dude! Do you avoid mirrors like a vampire? Because if you could see yourself as others see you, you wouldn’t know whether to spew or laff your ass off. But I’m pretty sure those would be the only two choices.

I know Henry Rollins keeps himself very busy, but maybe he could carve out a few more hours and provide some career counseling to these people and others like them. It wouldn’t take long. The message could be pretty simple: Shut the fuck up.