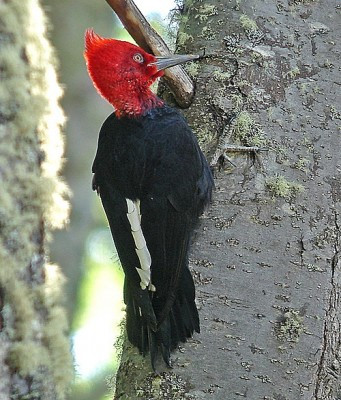 Good morning class! My, you’re all looking bright-eyed and bushy-tailed today! Today’s lesson is about woodpeckers.

Billy, I see your hand is up. Do you need to use the restroom or do you have a question?

Well, yes Billy, I can explain why we’re talking about “fucking woodpeckers” today instead of extreme metal — but I’ll ask you please not to use that kind of language with teacher in the future.  The reason we’re talking about woodpeckers is because I’m feeling like a real lazy-ass and was not up to preparing anything worthwhile today we sometimes take a break from discussing the wonders of extreme metal and instead discuss things that are “metal,” but aren’t music. And woodpeckers are definitely metal.

No, Billy you little shit, woodpeckers are not metal because their name includes the words “wood” and “pecker.” And I really don’t appreciate your giving me the finger. If you’ll bear with me, I’m going to explain exactly why woodpeckers are metal, and in fact I’m going to show the class a video that will surprise and astound you.

But before showing the video, I want to give you some background. And Billy, to put it in words that even you will understand, this information might actually be something you could use to impress your friends with your erudition — unless of course they’re already convinced you’re a useless fucktard and nothing you can say will make any difference. Or maybe your friends are mainly useless fucktards who aren’t interested in, or capable of comprehending, anything that doesn’t relate pretty directly to beer, weed, pizza, or sex/masturbation. (more of the lesson after the jump . . .) 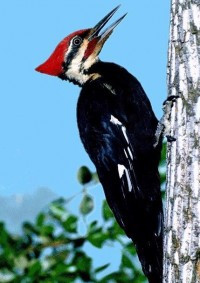 Anyway, Billy, giving you and/or your friends the benefit of the doubt, let’s talk about woodpeckers. Magellanic woodpeckers, to be precise.

As woodpeckers go, they’re pretty big.  They live mainly in parts of South America. They hammer their heads into trees many times a second, with considerable force. They look kind of like pileated woodpeckers (photo on the right), which you can find in North America, except their heads are completely red.

No Billy, I don’t know why their eyes don’t pop out and their heads turn to goo when they hammer themselves into trees. I’m sure I could find out, but there’s a limit to how much time I’m gonna spend on this woodpecker thing particularly since I’m doing this because I thought it would be a lot easier than preparing something worthwhile about music. It’s enough for you to know that the Magellanic woodpecker has taken headbanging to a level that’s probably unsurpassed in the natural world — and that makes it metal.

But that’s not all that makes it metal. It’s also fearless. I might go so far as to say it’s fearless to the point of insanity.

Yes, Billy, I’m about to show “the fucking video.” But I must say it’s extremely disrespectful to tell your teacher to shut his fucking gob and get on with it. I’d like to smash your fucking teeth in with a brick. You and I are going to have some words after class!

And now you will see a very metal woodpecker in a remarkable display of insane fearlessness: