I suspect that lyrics rarely play an important part in the creation of extreme music either. Most bands seem to work out the riffs, the rhythms, and the melodies first (if melody happens to be a part of the band’s sound), and the lyrics are added later.  By definition, the words aren’t inspiring the sound; if anything, the reverse is true. Sometimes, the words seem to have nothing at all to do with the feeling that the music conveys. (more after the jump . . .) 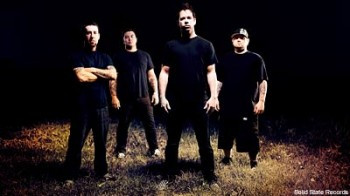 Again, I don’t mean this as a criticism. It’s just a fact, and it doesn’t make the music any less powerful or affecting.

But for some bands, I get the sense that the lyrics really are an integral part of the creative process – that expressing ideas or feelings is a critical part of what makes the band tick and is intertwined with the composition of the music.

I get that sense about Living Sacrifice (you knew I’d eventually work my way back around to them, didn’t you?).  Their lyrics express some deeply felt beliefs and ideas, most of which are rooted in their Christian faith. Maybe part of what drives this is a desire to proselytize, but I doubt that.

My guess is they’re more driven by the need to testify, to give voice to something that matters a lot to the band, something they need to say. I’m guessing they don’t much care if you agree, and they aren’t trying to persuade. Instead, it’s more like, “how could I possibly create music and not have it be about my faith?”

Of course, the way LS musically expresses their faith isn’t exactly what you might expect. This isn’t what I would call inspirational music. It’s not “touchy-feely.” It’s nothing remotely approaching what you would hear in any church.  The music is often dark and angry, and the lyrics likewise often reflect sorrow, frustration, and condemnation as much as they do hope and the power of redemption.

In the case of Living Sacrifice, the lyrics are also important because Bruce Fitzhugh has one of those unusual metal voices where you can actually hear much of what he’s singing, even though he’s got that deep, harsh, growling, death-metal vocal delivery. He actually enunciates!

The lyricism of Living Sacrifice may hurt the band’s popularity. Sure, the fact that they wear their faith on their sleeves has drawn a devoted following among Christian metal fans, but I’m sure it causes other metal fans to shut the door in their face. It would be a lot safer to stay away from polarizing topics like religion – but playing it safe isn’t part of this band’s agenda. 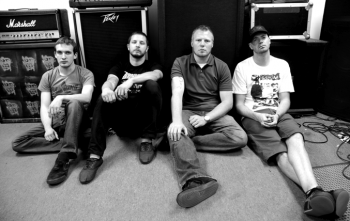 Of course, Living Sacrifice isn’t the only extreme metal band for whom lyricism is important. Jump to the other end of the spectrum and you’ll find a band like Gaza. Their latest album is entitled He Is Never Coming Back, and you can guess what that refers to.

Gaza’s lyrics are brief and caustic. They vehemently express complete disgust with the irrationality of religious belief and the consequences of blind adherence to religious dogma. The band lives in the heart of Mormon country, but they don’t pick on the LDS church or even on Christianity, more broadly defined. They’re ranting about all religious belief.

I get the same sense about Gaza as I do about Living Sacrifice – that the band’s lyricism is an integral part of the sound they create (which in Gaza’s case is dark, oppressive, furious, and punishing).

With bands like these, the lyrics matter to the music, even when you can’t hear all the words, because they reflect the precise creative energy that drives the entire enterprise and because they explain the music as much as they add to its emotional impact and force.

Though these two bands are poles-apart and probably don’t share many of the same fans (besides me), I respect them both for their integrity and for the honesty of their music.

Here endeth the lesson. Enough long-winded seriousness. Tomorrow, with any luck, we’ll return to mindless pummeling with a review of the Mosh Lives II show in Seattle (just to prove the point that lyricism isn’t critical to our love of metal).

In parting, as thanks to you for letting me get all this off my chest, let me leave you with a little metal: