I suspect that lyrics rarely play an important part in the creation of extreme music either. Most bands seem to work out the riffs, the rhythms, and the melodies first (if melody happens to be a part of the band’s sound), and the lyrics are added later.  By definition, the words aren’t inspiring the sound; if anything, the reverse is true. Sometimes, the words seem to have nothing at all to do with the feeling that the music conveys. (more after the jump . . .) END_OF_DOCUMENT_TOKEN_TO_BE_REPLACED

Years of working can produce staleness or lazy repetition of comfortable formulas. But this album is powerful and vibrantly alive. In the case of Living Sacrifice, the fire within has not gone out and the years of experience reveal themselves in superior song-writing and impeccable musicianship.  (more after the jump, including a track to stream  . . .) END_OF_DOCUMENT_TOKEN_TO_BE_REPLACED

We’ve got two more recommendations after the jump, so don’t stop here! END_OF_DOCUMENT_TOKEN_TO_BE_REPLACED

Yesterday Living Sacrifice made available for streaming the fourth song from their forthcoming new album The Infinite Order. The song is called “They Were One.” It’s packed with groove-oriented riffs, and the band’s thrash influences are really in evidence. This is one hellaciously infectious tune and (if possible) makes us even more stoked for the full album when it drops on January 26.

The band begins a 19-state tour on January 15, co-headlining with War of Ages. You can listen to “They Were One” and find dates and places for the tour by going here. 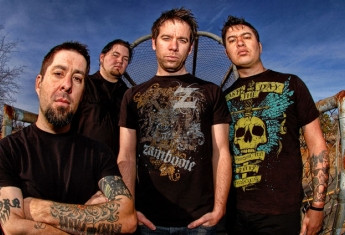