Louis Leterrier’s film stars Sam Worthington, but you will have guessed that already. These days, no major production is allowed to embark without him. He is the strapping Australian lad who, without warning, has found himself cast as a cyborg, in “Terminator Salvation,” as a would-be alien, in “Avatar,” and now as the demigod Perseus, in “Clash of the Titans,” while retaining the look of someone who cheerfully expects to be returning to a steady job on a building site. Sometime, if his luck holds, he could actually play a purebred human being and stay that way till the end of the movie; for now, though, he must be content with fifty per cent.

As a man, Perseus can march up hills and down into the mouth of hell with warrior friends like Draco (Mads Mikkelsen), who teaches him swordsmanship—“Stay focussed,” he says, in a phrase that scholars have long sought, yet never found, in the pages of the Iliad. Where is the fun, by contrast, in the lives of those who dwell on Mt. Olympus? They stand around on individual floating platforms like bored, middle-aged sunseekers waiting to do pool aerobics. 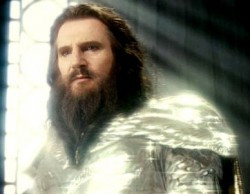 Danny Huston, in the role of Poseidon, gets about a line and a half of dialogue and then drops out of the movie, while [Liam] Neeson, as team leader [Zeus], comes wrapped in so much aluminum foil that, if I were an attendant mortal, I wouldn’t quite know whether to worship him or take him out every hour and baste him.

There’s more in this vein, and you can go here to read all of it.

But I’m gonna see the movie anyway. As a rule, I never let middling reviews stop me from seeing movies with giant scorpions, winged horses, krakens, people being turned to stone, and characters and creatures that remind me of metal bands.

Have you seen the movie?  What did you think?

One Response to “CLASH OF THE TITANS”