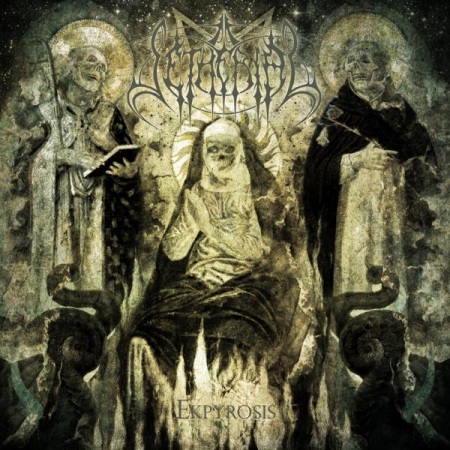 Ekpyrosis (which is apparently a Greek word meaning “conflagration”) is the sixth full-length album by Setherial, but the first to which we’ve paid attention — because of the cool album cover. The band’s MySpace page doesn’t have any tracks from the new album available for streaming on the music player, but does feature a video of one of them, a song called “A World In Hell.”

Take a wild guess what it sounds like. If you guessed black metal, congratulations. Is the song any good? Well, it’s not bad, but it’s not terribly original or very memorable.

If you don’t mind disturbing images of bodies writhing in agonized torment from a William Blake-ish painting, or bowls of gore-drenched maggots, or lots of blood splatter, or half-lit faces of corpse-painted band musicians, watch the video and form your own opinion.  Or, just skip down to our next test sample. 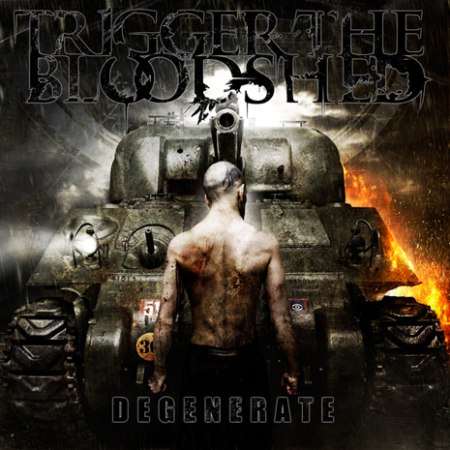 Our next sample is the cover for the third album by UK’s Trigger the Bloodshed. The album is called Degenerate, and it’s scheduled for a May 24 European release via Metal Blade Records (Rising Records in the U.K.). The cover artwork was created by Collin Marks, who’s previously created covers for Whitechapel, Aborted, and Suicide Silence.

We thought the album cover was cool. A scarred, bloodied, dirty, shaven-headed, tattooed dude who looks beaten up but not beaten — staring down a tank. What do you think? Cool enough to check out the music? Well, we wanted to. It probably helped that we’re already familiar with the band’s previous albums and liked them.

And as it happens, Trigger the Bloodshed put up the first song from the new album on its MySpace page yesterday. It’s called “De-Breed”, and it’s way cool — the tightest confirmation of our hypothesis yet. Some sick riffage launches the song, accompanied by Jonny Burgan‘s guttural death howls. The song kicks along with jackhammer rhythms until about the 2:20 mark, and then there’s a nasty wah-wah infused guitar solo, followed by a resumption of those groovy, shuddering riffs. This is definitely an album to wait for with hunger.

On to the third and final test result: 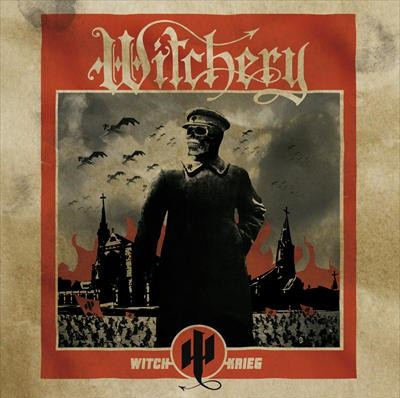 This is the album cover for Witchkrieg, the new album (due in July 2010 on Century Media) from Sweden’s Witchery. The cover was created by Andreas “Diaz” Pettersson, and we think it’s pretty eye-catching. What about the music?

Among our test samples, Witchery is another band we’d never bothered to check out. There have been some big gaps between the four albums Witchery has previously released (the last one came in 2006). This new one was mixed and mastered at Antfarm studios by Tue Madsen (Dark Tranquillity, The Haunted, Heaven Shall Burn) and marks the recording debut of the band’s new vocalist, Legion (Marduk, Devian).

If you go to Witchery’s newly designed MySpace page , you can check out a new song from the album called “The Reaver”. It’s a slice of galloping thrash that features some sweet filling of blistering shred by guest guitar soloists Gary Holt and Lee Altus of Exodus. If you’re a fan of thrash and you can resist any song with those two tearing it up, you’re made of stronger stuff than we are. And Legion’s vocals are what we expected — very appealing, in a very blackishly appealing way. In a word (or two), the song is fucking cool. Definitely a confirming test case for our ridiculous hypothesis.

So, that’s it for this experiment, at least for now.  Not 100% confirmation of the hypothesis, but pretty close.  Maybe at some point in the future, we’ll test a different hypothesis — that when album art sucks, it doesn’t necessarily mean the music is bad.

This connection between album art and music gets confusing, doesn’t it?