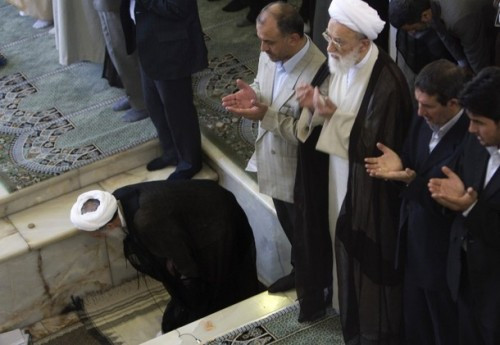 (the article continues after the jump, if you’ve got the stomach for it . . .)

“Some ask why (more) earthquakes and storms don’t occur in the Western world, which suffers from the slime of homosexuality, the slime of promiscuity and has plunged up to the neck” in immorality, he said.

“Who says they don’t occur? Storms take place in the U.S. and other parts of the world. We don’t say committing sin is the entire reason but it’s one of the reasons,” he said.

But, he said, “sometimes, God tests a nation. … (God says) if believers sin, We slap them because We love them and give them calamity in order to stop their bad deeds.”

“And those who have provoked God’s wrath, He allows them (to commit sins) so that they go to the bottom of hell,” Sedighi said.

Iran is one of the world’s most earthquake-prone countries, and President Mahmoud Ahmadinejad has warned that a quake is certain to hit Tehran and that many of its 12 million inhabitants should relocate. Tehran straddles scores of fault lines, though it has not suffered a major quake since 1830.

We think Iran’s President Mahmoud Ahmadinejad is on the right track: Many of Iran’s inhabitants should indeed relocate. Specifically, all the lunatic motherfuckers like Kazem Sedighi. Here are some suggestions about where they should go:

SETHERIAL: A WORLD IN HELL

2 Responses to “MULLAH SPEAKS AGAIN (it just gets worse)”