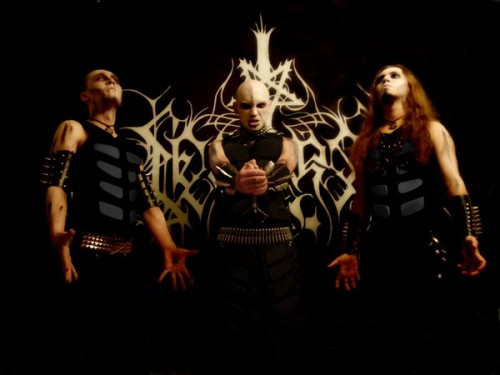 We’re still trying to wrap our minds around that concept — but it seems to be working out quite nicely for Semargl.  And we can guarantee that even if you’re having an unbelievably sucky day, this video (and the song) will put a smile on your face — or your money back! (more after the jump, including that video . . .)

We thought black metal was supposed to be grymm and icy. We thought satanic bands were supposed to sound evil. We expected the video would at least include bowls of maggots feasting on fresh gore.

But instead of squirming maggots, we’ve got hot squirming babes in shiny black underwear swiveling their cheeks to the beat. We’ve got pop-rock with broken-glass vocals.

If Varg Vikernes paid attention to this music, he’d probably want to slaughter all associated with the project (or at least he would have been so tempted in his younger days). But there does seem to be an appreciative audience out there for this music.  The band’s MySpace page and web site are pretty slick, and Ordo Bellictum Satanas (which hit the streets in March via the German label Twilight-Vertrieb) is the band’s fourth — so someone out there is diggin’ this shit.

Actually, hate to admit this, but we’re kinda diggin’ this catchy shit too, in a totally non-serious, it’s-better-than-Lady-Gaga way.  And the video makes a nice bookend to that Goldfrapp video that’s been making the rounds on the netz.  What? You haven’t seen that video? Well, what the fuck, we’ll put that one up for you right after this nasty bit of gargle from Semargl:

4 Responses to “SEMARGL (The Pop Fringe of Black Metal)”