A few short weeks ago, we mourned the apparent demise of Hour of Penance, a fantastic band from Rome that a well-known metal blogger characterized in an e-mail to us as “the Italian Behemoth.” (The most recent NCS post about HOP can be found here.) Our one consolation was the knowledge that the other band featuring the multi-talented HOP vocalist Francesco Paoli — Fleshgod Apocalypse — was still alive and well, and had a new album on the way.

Our advance copy of that album (which is really an EP) arrived a few days ago, and we tore into it like a pack of ravenous wolves. It’s called MAFIA, and that is indeed what it’s about. This statement from the band appears in the CD insert:

MAFIA is dedicated to all those who shed their own blood to fight the neverending curse of racketeering. We do support the war against those animals.

La Cosa Nostra is certainly not the typical subject matter of extreme metal songs, and we have more to say about the concept behind this album and the small and large ways in which that concept works its way through the music.

But to cut to the chase about the music, MAFIA will explode your head. If you liked this band’s debut album, Oracles, you will be mighty pleased by the new one. And if you haven’t yet checked out Fleshgod Apocalypse, don’t put it off any longer.  They’re putting out music that’s not quite like anything else you’ve heard. (more after the jump, including our favorite track from MAFIA . . .) 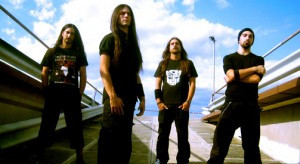 Let’s face it: No matter how technically expert or brutally propulsive a piece of blowtorch death metal may be, and no matter how much of a kick you get out of listening to that kind of supercharged music, you probably won’t remember any individual song an hour later, or even recognize a song the next time you hear it, unless it has a distinctive groove, a memorable melodic undercurrent, or some other element that’s outside the normal boundaries of the genre.

Forgetting is not something you will do after hearing MAFIA. Leaving aside the instrumental title track, which we’ll come back to, all the songs are fast as lightning and blazing with power, but they’re also embedded with infectious rhythmic hooks and memorable bursts of vocal and guitar melody.

The album contains only five songs — which is few enough that we think we can get away with the kind of song-by-song review that usually bores us shitless when we read them. But I guess you’ll be the judge of that.  Be gentle.

“Thru Our Scars” launches with just a whisp of classical violin and then erupts like a bottle rocket on the Fourth of July: Blazing guitar riffs, Francesco Paoli‘s maniacally fast (but tightly controlled) drumming, Tommaso Riccardi‘s staccato gutturals and Paolo Rossi‘s soaring clean vocals — and all that joined to a beautifully crafted rhythmic structure that just worms its way deeply into your cerebrum. This baby is already on our short list for the most infectious extreme metal songs of 2010. 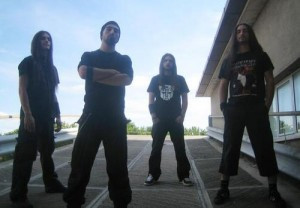 “Abyssal” again breaks out the chainsaw guitars and propeller drumming, ratcheted up at  Autobahn speed, and it’s again bursting with infectious, slamming rhythms. But that’s only the start. About two minutes into this song, the tempo down-shifts into an entrancing combination of fury and remorse, melded with samples from a speech by Totò Riina from an Italian miniseries called “Il Capo dei Capi” (more on what that’s about later).

And after that? Riccardo begins spitting those rapid-fire vocals, and the rest of the band blows out the doors again, with a mournful-sounding, dissonant lead riff emerging in the last minute, and a baroque orchestral arrangement finishing it off.

Which takes you right into “Conspiracy of Silence” — more blowtorch metal at the outset, with spinning lead guitars and obliterating drumwork, leading into a bridge of passionate clean vocals, followed by more rocket-engine instrumental pyrotechnics.

“Blinded by Fear” is the band’s cover of that epic song off Slaughter of the Soul by At the Gates. Fleshgod Apocalypse significantly ramps up the song’s speed and turns it into another brain-scrambler — fast as shit, but rhythmically compelling and threaded with a big groove-oriented riff — all of which dissolves at the end into the solitary sounds of waves crashing on a beach.

And that, brothers and sisters, is the last of the metal on this EP. Yes, there is indeed a fifth song. But it’s a classical piano instrumental written and played by guest musician Francesco Ferrini, with a distinctively Italian melody. It’s passionate, but desolate at the same time. It’s called “Mafia”.

And that takes us back to the subject matter. Lyrically, the first three songs on MAFIA are enraged indictments of the death, pain, and soul-killing terror inflicted by the Mafia in Sicily (and elsewhere), and the emotional power of the words is reflected fully in the onslaught of the music. Of course, FA did not write “Blinded by Fear,” but the words of that song also fit the theme of MAFIA like a glove. 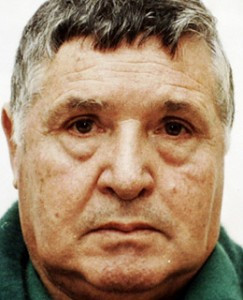 We mentioned that “Abyssal” includes an excerpt from a speech by Totò Riina from an Italian mini-series about his life. By the early 1980’s, Riina had became the most powerful member of the Sicilian Mafia. According to The Font of All Human Knowledge, fellow mobsters nicknamed him The Beast due to his violent nature. During his life-long career as a violent criminal, he is believed to have personally killed around forty people and to have ordered the deaths of several hundred more, including heroic prosecutors Giovanni Falcone and  Paolo Borsellino.

Riina was eventually arrested and convicted of numerous crimes, including more than 100 counts of murder, and authorities confiscated from him assets valued at more than $125,000,000. He is currently serving multiple life sentences in a maximum-security prison.

In the speech excerpted by Fleshgod Apocalypse in “Abyssal,” he proclaims that in Sicily, he is the State, and the Mafia make the laws. And sadly, for many years, that was undoubtedly the truth — a truth that Fleshgod Apocalypse uses this EP to condemn.

The songs on this album would be awesome to hear even if they were about something else entirely, or about nothing at all. But the concept behind the album adds a layer of significance that makes this collection even more compelling.

Here’s our favorite track from MAFIA for you to hear.  The album will be officially released by Willowtip Records on June 8.

Fleshgod Apocalypse: Thru Our Scars