We’re taking a little break from our usual posts today to celebrate a milestone (although below this post, we did put up our monthly update on forthcoming new releases). Tomorrow and the next day: Reviews of some new albums that will make your heads explode.

Not too long ago, we passed a milestone here at NO CLEAN SINGING. On May 21, 2010, we hit the six-month anniversary of this site. Six months ago, we put up our first half-baked post. We had 9 visits for that ugly little baby, including the 3 of us who collaborate in putting this thing together. Shit, most of our friends weren’t even interested.

How things have changed! In the six months since we gave birth to this monster, after a slow ramp-up, we’ve had more than 21,000 unique visitors from 122 different countries. The posts we’ve written have drawn more than 35,000 page views, and the number of unique visitors is now over 500 per day — with the trend continuing to climb. (How do we know all this? For you non-bloggers out there who may not understand, stay with us, and we’ll eventually get to that below).

We’re not quoting all these stats to slap ourselves on the back — even with the growth of our audience, the traffic we get here at NCS is a drop in the bucket compared to some other metal blogs that you probably also read. And the truth is, we’re kinda bewildered by the attention.

At the same time, we’re also pathetically grateful — and we owe some thank-you’s to people who’ve helped us get noticed: to bands, fellow metal bloggers, and NCS readers. So, bear with us while (once again) we wear our hearts on our sleeves.  (more after the jump . . .) 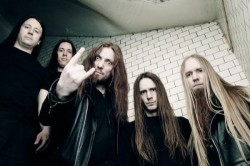 Does it matter to us that people visit NCS? Well, hell yeah it does! If we didn’t care whether anyone read what we wrote, we’d just keep a fucking diary.

We write about metal not just because we like writing about something so important to us and because we get to use words like “fuck,” “fucking,” and “fucked” in print whenever we like, but because we want to share what we know and what we’re thinking with other people who care about the music and the scene as much as we do. In a nutshell, we definitely do want to be read!

But, we’re not only interested in being noticed. If attention is all we wanted, we’d just drop trow and moon a cop. We also want to believe we’re offering something that’s useful to readers, or at least entertaining — and we do try hard to pull that off every day.

At the same time, we’re honest enough with ourselves to know that what we’ve accomplished is mainly due to the efforts of lots of other people who’ve helped spread the word about NO CLEAN SINGING — bands we’ve written about, other metal bloggers, and metalheads who’ve visited us regularly.

So, in commemoration of our six-month milestone, we offer the following thank-you’s, plus a few other random observations. And our pictorial theme for the day, of course, is “throwing the goat.” 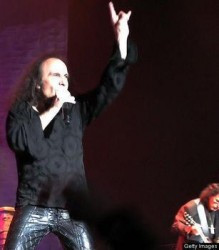 Our first thank-you’s go out to the bands. The music, after all, is what this site is mainly about. We continue to be humbled by how many talented artists are turning out kick-ass new music every week — despite the massive obstacles to building a career in the world of extreme metal.

We like discovering new music, and one of our goals from the beginning has been to turn you on to sounds you might now hear about in another way. That’s one reason why we pay attention to bands from countries all over the world (including ones that aren’t exactly the best launching pads for our kind of music) and why we like trying to give a leg up to DIY acts with talent.

We certainly don’t expect thanks from the bands we write about, but we’ve been amazed at how many musicians have taken the time to e-mail us some really nice thank-you notes — from Bruce Fitzhugh of Living Sacrifice to Sakis Solis of Rotting Christ, from Franck Quintin and Mika Andre of Eryn Non Dae to Jesper Zuretti of The Binary Code, from Gus Drax to Mike Kvidera of The Brown Book, from Henke Zinger of God Dethroned to Jorgen Munkeby of Shining and Afaque Azad of Infernal Wrath, from Rich Hoak of Brutal Truth to Keith Putnam of Flaming Tusk and Billy Anderson of Ever Forthright — and dozens more.

It’s been a vivid reminder of something we already knew and the rest of the world doesn’t really understand — that although metalheads play and listen to some unusually aggressive and often down-right nasty music, it’s a community of really decent people who care about each other. 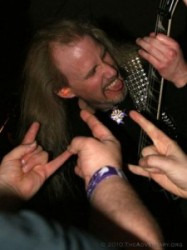 Apart from all the e-mail exchanges, lots of the bands we’ve written about have also helped spread the word about this site to their fans via links on Twitter, Facebook, and MySpace. The guy who gets the grand prize for that is Cameron “Big Chocolate” Argon — and all his fanatic fans. We’ve had over 2,000 hits on the posts we wrote about him (here and here) — and they’re still coming in.

We’ve met some very cool musicians through this site, but we’ve got to single out the experience we had with Kansas City’s Ares Kingdom. As a result of our review of their superb new album and a related follow-up post about parents, we got wonderful messages not only from the band but from their friends and family members, including a report about the wedding reception of drummer Mike Miller where our blog was a topic of discussion (you can see some of those messages here).

On the subject of bands, our one regret is that we can’t write about more of them.  Unfortunately, there’s a limit to how much blogging time our fucking day jobs and the rest of our lives will allow. And when someone sends us new music to hear and we fail to write about it, many times it’s got nothing to do with how good the music is, and a lot more to do with just running out of fucking time before we need to move on to something else.

Moving on. We’ve benefitted from some truly heart-warming support from a number of other metal blogs — all the more heart-warming because, in some sense, we compete with each other for your eyeballs.  At the top of our thank-you list are the two blogs that inspired us to start NCS in the first place. 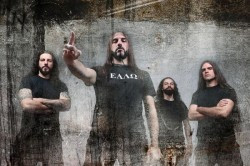 Reign in Blonde remains one of our without-fail daily reads. Their quirky posts always put smiles on our faces, and those three ladies can all really write. Apart from being inspirational to us, they were the first metal blog to add us to their list of recommended links — way before we even came close to deserving it — and they’ve paid attention to us in other ways, too (including picking me as one of their monthly “Panty Raid” winners).  Thank you ladies!

Metal Sucks is the other site that inspired us to start this one. They are, of course, the 800-pound gorilla of metal blogdom, with a massive and well-deserved fan base and a daily mix of posts that are by turns informative, thought-provoking, and funny as shit.

The site’s co-owner Vince Neilstein has patiently replied to e-mails from me about bands I get enthusiastic about, but the biggest, over-the-top solid he did us was to put up a post recommending this site just as the Memorial Day Weekend was about to start, when people had a little more time than usual to spend web-surfing. As you might expect, that brought us a ton of new readers, and we’re very grateful for that well-timed bit of kindness.

We also want to send out special thanks to the people who create Steff Metal (whose author periodically shares her wit and wisdom through guest posts here at NCS), The Number of the Blog, Positively Bleak, and Baroque, Bleak and Brutal, both for their support and, more generally, for being such cool fucking people.

ALL THE REST OF YOU MOTHERFUCKERS OUT THERE

Last on the list, but first in our hearts — all you readers out there who had the fortitude to continue coming back here after your first visit, and maybe even told your friends about us. By the way, sometimes we like to pretend we’re Frank Mullen, so when we call you “motherfuckers,” we mean that in the fondest possible way.

We want to give an especially loud “Fuck Yeah!” to the readers who take the time to leave a comment on our posts. We certainly don’t expect that (and in fact we’re pretty bad ourselves about leaving comments on the sites we visit), but when it happens. it perks us right up — and we make a point to respond to every comment we get.

We know we’ve got to earn your support every day. There’s just too little time and too much to do for people to come here, even for a few minutes, unless they really get something out of it. So that’s our main motivation.

So far, we’ve kept the promise we made ourselves in the beginning to put up something new every damned day. We’ve had some near-misses on that promise, and, slackers that we are, there’s bound to be a day when we fuck up — but so far so good. 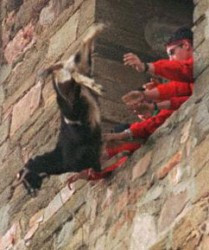 We’ll also continue trying to improve our writing — though don’t expect our taste to improve, or to see reduced usage of “fuck” and its derivatives. We’re only human after all.

I suppose that’s more than enough blather about our six-month milestone. You can just imagine what it will be like if we’re still here after a year. What we write then will make this post look like a tweet.

P.S. How do we know those stats about visits to our site? Well, we signed up for a service called Google Analytics. When you do that, Google puts little bits of code in your web pages that enables it to track and report your site usage. Odds are that any site you visit that includes ads, and many (like this one) that don’t, is a participant in Google Analytics.

Google says the info they gather is anonymous (i.e., no personal identifying information about site visitors). Of course, they’re a big money-sucking corporation, so I automatically distrust them. But whether they’re being truthful or not, the reports we access certainly don’t include that kind of detail.  All we get is a bunch of aggregate numbers — and it is kinda cool to see our total visits broken down into country-of-origin.

Online advertisers live and die by their Google Analytics reports. We don’t advertise (and have no plans to advertise), so we look at these reports solely out of narcissistic curiosity.

12 Responses to “A MILESTONE (And Some Words of Thanks)”